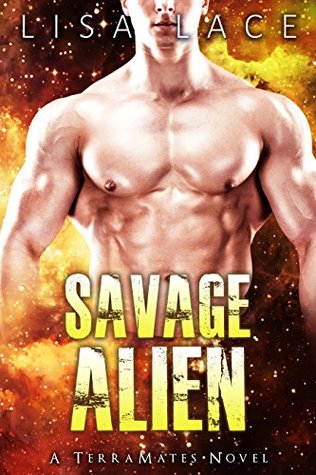 Michelle’s dating a movie star and from the outside, her life looks glamorous. But she wants something more. At night, Michelle has dreams about an alien. She can’t believe how handsome he is and lets him do unspeakable things to her. After all, it’s just a dream, right?

She’s surprised when the alien appears out of nowhere. When she’s at TerraMates, the intergalactic mail-order bride agency, Caspian Coore walks into the room, looking for some oversized parts to fix his spaceship. Everything’s bigger about these aliens.

Michelle had her future planned out, and a large, stern alien warrior isn’t supposed to be part of it. Besides, Caspian is a Yarian. They’re always promiscuous and love to party. Yarians only make an exception if they find their flaura…their eternal soul mate. Michelle’s definitely not Caspian’s flaura. She won’t let him penetrate her defenses.

This story takes place in the TerraMates universe, but can be read as a standalone novel.

I really enjoyed listening to SAVAGE ALIEN, the 12th book in Lisa Lace’s SciFi series TerraMates. Savage Alien stands out from the other books in the series in several ways. For one, the hero/heroine in question only casually meet accidentally the first time at the TerraMates offices rather than being matched through the program. Secondly, they aren’t married by the end of the book. Lastly, Michelle is actually in a relationship with Tate, who is a local celebrity, when they do first meet. Still, this story was very fun to read and kept my interest from start to finish.

Caspian, or Caz as he prefers, is a Keeper. A big dark, sexy hulk of a warrior who comes from a planet where his only pastimes are casual sex and sleeping when he isn’t protecting the kingdom. He finds himself temporarily on Earth after the ship he, the Prince, and several other Keepers were headed for home on after completing their most recent mission, is forced to land for safety. Since they will be there for several weeks waiting War the parts needed to make the repairs to the ship he makes the best of it by spending time in the clubs in the area hoping to meet women from Earth.

Michelle has been living with the very self-absorbed and narcissistic Tate for over 3 years now. She isn’t really happy with him but believes that all couples go through difficult periods and she owes him her loyalty and effort to make things work. The fact that she keeps bumping into the sexy alien isn’t helping her cause. Likewise Caspian is very interested in Michelle and is not detoured when he sees her with Tate. It’s apparent to him the man does not appreciate her or even really care for her. Caz on the other hand cannot get her out of his mind and pursues her, despite the many other women he has opportunities with.

Despite never leaving Earth there is danger and suspense involving all the main characters including the Prince. Michelle, Caspian and the other Keepers must work together to save Earth from a dangerous plot.

Great story that was well read by the narrators.

~Complimentary audiobook received. Opinions expressed in this review are my own.