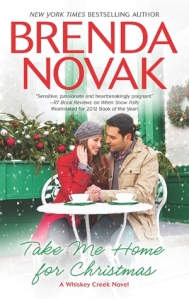 Christmas is a time for remembering.

Too bad all memories aren’t pleasant. Everyone in Whiskey Creek remembers Sophia DeBussi as the town’s Mean Girl. Especially Ted Dixon, whose love she once scorned.

But Sophia has paid the price for her youthful transgressions. The man she did marry was rich and powerful but abusive. So when he goes missing, she secretly hopes he’ll never come back—until she learns that he died running from an FBI probe of his investment firm. Not only has he left Sophia penniless, he’s left her to face all the townspeople he cheated.

Sophia is reduced to looking for any kind of work to pay the bills and support her daughter. With no other options, she becomes housekeeper for none other than Ted, now a successful suspense writer. He can’t bring himself to turn his back on her, not at Christmas, but he refuses to get emotionally involved. He learned his lesson the last time.

Or will the season of love and forgiveness give them both another chance at happiness?

In TAKE ME HOME FOR CHRISTMAS Brenda Novak has given us a heart-wrenchingly raw, but wonderful tale of second chances. Her heroine, Sophia Debussi, has never been very well liked in her hometown of Whiskey Creek. Jilting one the town’s favorite sons while he was away at college to marry the wealthiest bachelor in town only added to her reputation back in high school as a “mean girl”. Our hero, Ted Dixon, was heartbroken when Sophia dumped him to marry Skip Debusssi and never really got over her even though it’s been fourteen years.

While the residents of Whiskey Creek loved the smooth talking Skip, enough to hand over their life savings in many cases, and were glad for Sophia’s charity work, no one called her friend. When her husband truly lived up to his name and tried to skip the country stealing everyone’s money Sophia’s spoiled style of living was blamed. No one was willing to see how she and her daughter, Alexa, were Skip’s biggest victims of all or realized that they had been for the entire marriage. Sophia goes from riches to rags and has no one to turn to. Ironically the boy she jilted so long ago is one of the few who reach out to help her, despite his bitter feelings toward her. Although Ted offers Sophia a job, he too remains determined to keep his distance and protect his heart from the only woman he’s ever loved.

This is a well-written story of how Sophia blossoms in the face of a town full of angry people seeking vengeance on her for her husband’s behavior and how her integrity and honest willingness to do what is right brings out a strength in her even she is surprised to find. Testimony to Novak’s incredible writing, I felt her relief, her fear, her anguish, her love for her daughter, her defeat, her anger, her resoluteness, her hope, and her never forgotten love for Ted. And Ted, he got his second chance too. The chance to have the love of his life, back in his life. Sure he has to fight his own demons, face the worry and disapproval of friends and family, but he gets there when he finally allows himself to see what Sophia’s life has really been like and the beautiful woman she has become out of the ashes. Their love story was very romantic in that age old way that Ted became the Knight to help save the Damsel.

TAKE ME HOME FOR CHRISTMAS is the fifth book in the Whiskey Creek series. It is a stand-alone novel with no cliffhanger. I have not read the previous four and had no problem following the storyline although I feel my reading experience would have been enhanced if I had the back story on some of the now secondary characters. I intend to remedy that situation straight away because they were a very engaging group!

~Complimentary copy provided by author in exchange for an honest review.