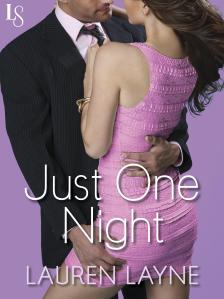 In Lauren Layne’s sizzling Sex, Love & Stiletto series, New York’s hottest “sexpert” has been living a lie—and it’s up to one man to keep her honest…all night long.

Riley McKenna knows sex—good sex, bad sex, kinky sex…Her articles in Stiletto magazine are consistently the publication’s most scandalous—and the most read. But Riley has a secret…all that sexy talk? Not an ounce of it comes from personal experience. Her own bedroom escapades are more limited than even her best friends know. When her editor requests that all columnists write something more personal for Stiletto’s anniversary issue, Riley turns to the one man she’s always been able to count on and calls in the favor of a lifetime.

Sam Compton would do anything for Riley McKenna. Anything except be her experimental sex toy. He refuses her request. At least until she tells him that it’ll either be him or she’ll go to someone else. And that, Sam can’t accept. Reluctantly he agrees to her terms—one night of completely meaningless sex in the name of research. Riley thinks she’s prepared for what awaits her in Sam’s bed. After ten years of writing about sex, actually doing it shouldn’t be that different, right? So wrong. What starts as “one time only” becomes “just one more time.” And then one more. And before they know it, Riley and Sam learn first-hand that when it comes to love, there’s no such thing as just one night.

JUST ONE NIGHT in the Sex, Love and Stiletto series is on sale now!
Get your copy today at Amazon or Barnes & Noble
Add JUST ONE NIGHT to your Goodreads shelf!

I really love the Sex, Love & Stiletto series and that with each book it gets better and better. I love that I, like every other reader and every other character in this series, had a very firm opinion of Riley McKenna and in JUST ONE NIGHT Ms. Layne slips in an amazing surprise when Riley finds herself in a bit of a crisis with work that is a game changer. It was a wonderful surprise and really made the book, and Riley, so much more interesting. Not that this great group of friends and lovers so hilariously written by Ms. Layne need much help.

Admittedly friends-to-lovers stories are one of my favorites, but this one felt unique. Maybe because both Riley and Sam have had such strong feelings for each other for the past TEN YEARS!! Riley’s friends could see they were perfect for one another, loved one another, but these two were so busy being in denial and not wanting to spoil a friendship they chose to fight and bicker and verbally spar instead. Yet, underneath these things they used to cut the sexual tension between them was true caring. They each compared all others to the other, made daily and even life decisions based on their feelings even if they didn’t admit that’s what they were doing. He was a great balance to Riley and she was a great motivator for him. They are just so perfect together!

Sam was so sweet, earnest, hot, sexy, passionate and broken. God I hated his mother. It’s got to be hard to write a man so damaged and not seeing his potential, and still make him loveable and desirable and book boyfriend material but Ms. Layne pulls it off. Riley was not an easy person, she is sassy, full of spunk, mouthy, stubborn, and not afraid to say – or write about – whatever is on her mind. I mean, she writes as a sex expert for goodness sake, and nothing is off limits. But Sam is her match. I loved their bantering, the sexual innuendos, how they just plain got each other. And once they do decide to take it to the next level it is crazy hot and steamy! Ten years of built up desire and sexual frustration for one another was smoking hot to read! I loved how Sam kept asking to try out some of the things Riley had researched and wrote about in her sex column to keep spicing up their bedroom antics to the next level. And I loved how much he cared about her family and was just as afraid of losing them as he was Riley.

All of the previous characters from the first two books are front and center adding more hilarity as well as emotional depth to the story. These four best girlfriends are so good together! I loved the advice, the schemes, and the dragging of their men into their plotting. Sam really never stood a chance. Lucky man! Just One Night kept my interest throughout the entire story and had me hating that it was over. I can’t wait for Emma’s story! Unlike Riley we know up front she’s a major secret keeper, so I know it’s going to be amazing when it all comes out! 5 stars.

~Complimentary copy received via NetGalley in exchange for an honest review.