From the #1 New York Times bestselling author comes a powerful, emotionally complex story of love, loss, the pain of the past—and the promise of the future.

Sometimes the greatest dream starts with the smallest element. A single cell, joining with another. And then dividing. And just like that, the world changes. Annie Harlow knows how lucky she is. The producer of a popular television cooking show, she loves her handsome husband and the beautiful Los Angeles home they share. And now, she’s pregnant with their first child. But in an instant, her life is shattered. And when Annie awakes from a yearlong coma, she discovers that time isn’t the only thing she’s lost.

Grieving and wounded, Annie retreats to her old family home in Switchback, Vermont, a maple farm generations old. There, surrounded by her free-spirited brother, their divorced mother, and four young nieces and nephews, Annie slowly emerges into a world she left behind years ago: the town where she grew up, the people she knew before, the high-school boyfriend turned judge. And with the discovery of a cookbook her grandmother wrote in the distant past, Annie unearths an age-old mystery that might prove the salvation of the family farm.

Family Tree is the story of one woman’s triumph over betrayal, and how she eventually comes to terms with her past. It is the story of joys unrealized and opportunities regained. Complex, clear-eyed and big-hearted, funny, sad, and wise, it is a novel to cherish and to remember.

If I had to choose one word to describe my impression after reading FAMILY TREE by Susan Wiggs it would be gripping. Right from the start my attention and soon after my emotions were completely caught up in this poignant and beautifully written story of Annie Rush’s life, both before and after a tragic accident. Wiggs reveals Annie’s life and the choices she’s made while skillfully drawing you in to her joys, sadness, anger, disappointments, struggles, excitement, and love. The complete picture of a life fully lived, as is typical of Wiggs’ books, which are always so finely detailed.

“It’s time to let go of the person you were. Try to recognize the new person emerging from all this.”

While there is a love story involved, the theme is clearly more about starting over than romance. About a second chance in every sense of the word. As a young woman Annie walks away from Fletcher Wyndham, her first love, in order to pursue her dreams. She found great success in her career and believed she had a solid marriage with Martin, her husband and business partner. Her discovery of his betrayal is immediately followed by an accident that leaves her in a coma and back with her family in Vermont. Her recovery process allows her to take fresh look at her life, her relationships and decisions as she heals. This includes a reunion with her father, who had walked away from the family when she was just a child, and another chance to rebuild. But more importantly getting back to her roots puts her first loves in perspective. Fletcher, who has never gotten over her, and vice versa. Her love of food and cooking, instilled by the time spent at her grandmother’s side from an early age. And her gift of capturing the key moments and heart of people in her films.

Wiggs writing style flows easily, even as she moves back and forth between the present and the past. Her characters and story are fully developed and, as I said in the beginning, gripping. Reading FAMILY TREE reminds me of how her writing is always consistently fabulous. It’s been awhile since I’ve read one of her books and now I’m truly asking myself why. Don’t miss out on this one! 4 stars

~Complimentary ARC provided by publisher in exchange for an honest review~ 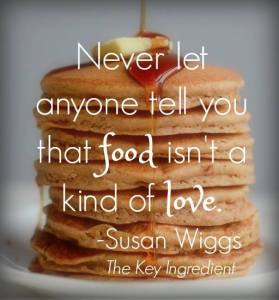 Every great love story has a beginning. Annie Rush’s started at a food cart in a vibrant city park. Annie, then a film student, came across a ruggedly handsome, charismatic chef serving up gourmet street food to an ever-growing clientele lining up for his creations. Together, Annie and Martin Harlow conceived The Key Ingredient, a cooking show featuring Martin as the star while Annie handles production.

As they travel to Annie’s Vermont hometown to film their pilot episode, she realizes that she might want to create more than television magic with Martin. But does he feel the same way? The weather is miserable, their shoot is a disaster, and the maple syrup just isn’t flowing. While Annie tries to cling to her vision for their show, she can’t help but wonder if she could be as unlucky in work as she is in love. Is she always destined to stay behind the scenes?

Just as some recipes only come together at the last minute with the addition of a key ingredient, sometimes a single moment can change everything—turning Annie’s life into a cornucopia of good fortune, the feast of her dreams. 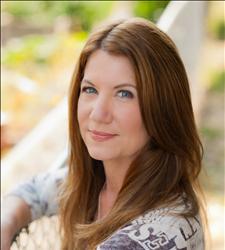 SUSAN WIGG’s life is all about family, friends…and fiction. She lives at the water’s edge on an island in Puget Sound, and she commutes to her writers’ group in a 17-foot motorboat. She serves as author liaison for Field’s End, a literary community on Bainbridge Island, Washington, bringing inspiration and instruction from the world’s top authors to her seaside community. (See http://www.fieldsend.org) She’s been featured in the national media, including NPR’s “Talk of the Nation,” and is a popular speaker locally and nationally.

According to Publishers Weekly, Wiggs writes with “refreshingly honest emotion,” and the Salem Statesman Journal adds that she is “one of our best observers of stories of the heart [who] knows how to capture emotion on virtually every page of every book.” Booklist characterizes her books as “real and true and unforgettable.” She is the recipient of three RITA (sm) awards and four starred reviews from Publishers Weekly for her books. The Winter Lodge and Passing Through Paradise have appeared on PW’s annual “Best Of” lists. Several of her books have been listed as top Booksense picks and optioned as feature films. Her novels have been translated into more than two dozen languages and have made national bestseller lists, including the USA Today, Washington Post and New York Times lists.

The author is a former teacher, a Harvard graduate, an avid hiker, an amateur photographer, a good skier and terrible golfer, yet her favorite form of exercise is curling up with a good book. Readers can learn more on the web at www.susanwiggs.com and on her lively blog.