In A Price Above Rubies by Maggie Robinson, set in the Regency era, paid companion Helen Lowe doesn’t know the man she shares her first-ever dance—and first-ever kiss—is Gabriel Wynter, a reclusive, notorious duke. When Helen flees after being exposed, she leaves behind something of far greater value than a glass slipper. Can Gabriel find her, return it, and finally open his heart?

In the Victorian-era set, Never Have I Ever Fallen in Love with a Duke by Tiffany Clare, Alexander Wynter has a problem—his best friend’s younger sister grew up. When he agreed to help Emily MacCallon make her debut, he didn’t expect the beautiful, alluring woman before him—or for her to lead him on such a merry chase. Alexander knows one thing: the only man she’ll be kissing forever and ever is him.

In the World War II-set, Loving Lord Spy by J.K. Coi, Winnie Jenkins, a combat nurse, and Lord David Wynter, an injured British spy, fall in love at the worst possible time. Each of them owes a duty to their country and must go their separate ways. They promise that when the war is finally over, they’ll meet in Hyde Park on Christmas morning…but agree that if one of them doesn’t make it, the other won’t seek out the reason why. Can they keep their appointment? Or will secrets, lies, and the perils of war keep them apart?

A missed connection gets a second chance in the present-day contemporary romance, Saved by the Belle by Elyssa Patrick. Seven years ago, Kit Wynter met the woman of his dreams. Even after all this time, he’s never been able to forget the American girl who captured his heart. When Belle Sweeney answers his ad—for she, too, never forgot him—it feels like there’s something still there. Spending the holiday at Ravenglass Abbey is the perfect opportunity to figure out if this is love.

ONCE UPON A CHRISTMAS, A Wynter Family Saga

Right off I have to say, I’m very excited to have been given this opportunity to read ONCE UPON A CHRISTMAS, THE WYNTER FAMILY SAGA by Maggie Robinson, Tiffany Clare, J.K. Coi, and Elyssa Patrick. First of all, I’m a sucker for Christmas themed stories, so four at once? Yes!! Secondly, I really enjoy reading new-to-me authors and of the four, I have only read previous books from one of these authors. Yes!! Lastly, my favorite romance genre is historical novels. Three of these four novellas are set back in history, roughly the Regency era, the Victorian era, and then during World War II. Plus the fourth book in this anthology is written by one of my favorite writers, so… Yes!!!

As for the book itself, I think what I love most was the unique way they were all linked together. Each of these stories describes how the men of the Wynter family, the Dukes of Ravenglass, each fell in love at Christmas time in very unexpected and truly romantic ways. Although every story was completely different, the benefit of having being written by different authors, they each held with certain Wynter family traditions… without seeming to try. The most prevalent being that these rich, handsome and brave Dukes were not looking for arm candy. They each fell almost instantly in love with a feisty woman who challenged them, and dare I say, completed them. And the heroines were beautiful in every way.

Every one of these stories was a joy to read. They were engaging, well developed and written. The characters were likeable and believable to the times. The settings were detailed and easy to imagine. The dialogue was often humorous (another plus for me) and quite witty. There were some steamy scenes, plenty of romance, and the all-important happily ever after! All-in-all, a total delight to read!

~Complimentary copy received. All opinions expressed are my own.

✽ Check out more of MsChris1161’s reviews on Goodreads ✽ 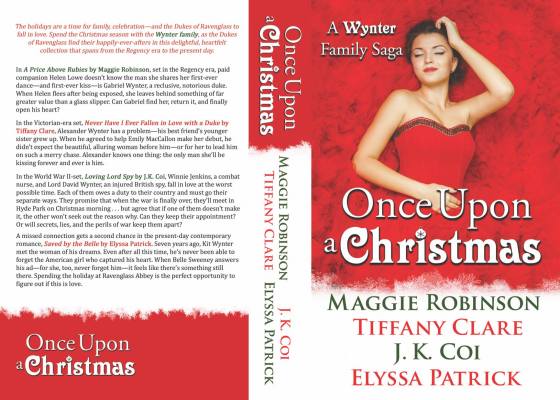 Maggie, Tiffany, Elyssa, and I want to thank you very much for your interest in Once Upon a Christmas. It’s a project very close to our hearts. You see, the four of us met in a small online writers ’ group almost ten years ago, when we were still honing our craft and hoping that we would one day be published. Since then, Maggie has gone on to pen beautifully heartwarming historical romances with wonderfully witty, funny characters; Tiffany has published sexy, brooding heroes and daring heroines in her avant-garde historicals; Elyssa has given readers delightfully quirky contemporaries with tons of heat and heart; while I gravitated toward dangerous settings with angsty, damaged characters in both paranormal and contemporary romance. So, despite our early and lasting connection, the four of us have always been too far apart writing-wise to be able to collaborate . . . until now! We were so excited to have the opportunity to work on a project together, one that would highlight all of our strengths and experiences, but also give us a chance to try something a little different. The result is Once Upon a Christmas, an anthology of four Christmas novellas. But this collection is bound together by more than just our friendship, or the fact that each of these wonderful stories takes place over the holidays. It’s also connected by missed or rediscovered connections, a beautiful ruby signet ring, and of course, the all-important theme of . . . family. In Maggie’s novella, A Price Above Rubies, we get our first glimpse of the Wynter family. As the sixth Duke of Ravenglass, Gabriel Wynter certainly has his hands full with the independent and mysterious Helen Lowe, and their Cinderella story inspires generations of Wynter descendants. In Never Have I Ever Fallen in Love With a Duke, Tiffany’s hero is one such descendant. Alexander, the eighth Duke, promptly becomes entranced when he reconnects with the spirited and beautiful Emily MacCallon, and his promise to find her a husband suddenly becomes a heavier burden than he bargained for, because all he wants to do is keep her for himself. Fast forward a couple of generations to 1944, and J.K. Coi’s hero in Loving Lord Spy is in line to become the tenth Duke of Ravenglass, but first he’ll have to survive the war. When David is injured and meets combat nurse Winnie Jenkins , he knows she’s the one for him, but he also knows that he can’t make her any promises, at least until he has fulfilled his duty to his country . . . and so much can change between now and then. In Saved by the Belle, Elyssa’s modern day Duke, Kit Wynter , makes our hearts melt in a contemporary Christmas story, when a missed connection gets a second chance. By spending the holiday at Ravenglass Abbey, Kit hopes to show Belle Sweeney his home . . . and his heart. And this time, he won’t let the love of his life get away. Maggie, Tiffany, Elyssa and I wish you very happy holidays, and we hope that you lose yourself in these heartfelt Christmas stories. We had a wonderful time writing them, and hope to bring you more stories of the Wynter family very soon!

Excerpt: Saved by the Belle~

And yet he waited, driven by foolish hope that Red would appear.

But why would she? Seven years had passed since that fateful night. They had never even kissed. He didn’t know anything about her, except that she lived somewhere in America.

He gave up his pacing and leaned against the wall, the tickets held in one hand. What had he been thinking to post that Missed Connection in The London List? He’d never posted an ad—and certainly not one like that. To do so was completely out of his character. But it had been the anniversary of the day that they’d first met, and as always, it brought up memories.

It wasn’t as if he was unhappy or lonely, but . . . He couldn’t exactly describe it. Not completely.

He only knew he felt as if he’d missed out on something all those years ago. He’d wondered what if ever since, and on that particular day, he’d been wondering even more than usual. Donning a cloak of anonymity, he ended up posting the ad and then checked it endlessly. He received many responses, but none had been her.

The train was due to leave in five minutes. He was headed to Cumbria, or more specifically, to his home, the ducal estate, Ravenglass Abbey. His mother and his younger siblings were expected to arrive on Christmas Eve. He may have been born Christian Wynter, now the twelfth duke of Ravenglass, but to his family . . . he had been—and always would be—Kit. Thank God for that; he had no desire to stand on ceremony.

But Kit had thought to show Red his place, who he really was, and to see if he was right about that night from seven years ago. He had felt a connection to her that he’d never felt before—or hadn’t felt since. He hadn’t even tried to move on, because all women had paled in comparison to one unforgettable American girl.

Kit had delayed as long as he could from getting on the train and taking his seat. He took one last look in both directions, but no Red.

It wasn’t going to happen.

Realization sunk in, heavy and depressing. He should not have dared to hope. This was why he didn’t let himself indulge—it was bound to end in disappointment.

He would need to move on—somehow—and accept that the missed connection would stay missed. It would be a long journey home. His thoughts would be endless of her, and how he should have left it well alone and never posted the ad. But he would have always wondered. Now, at least, he knew for sure, as painful as it was.

And he needed to get on the train.

He turned toward the open doors and placed a hand on the rail, the other holding his carryon. Hesitation slowed his movement forward. Hope continued to beat in every fiber of his being, that he’d hear running footsteps, a furious shout, and—