Seven years ago, Juan Martinez lost everything—his only parent, his home, his life as he’d known it. Alone, lost, and desperate, he turned to the Reyes Hispanos—the RH—one of the most violent gangs in South Texas. But when you sell your soul to the devil, you pay a heavy price. Convicted of a drive-by shooting, Juan has served hard time. Finally out on parole, he wants to disappear—from the RH, from memories of all that he’s lost, and especially from the gorgeous woman who just showed up next door.

Beth Garcia grew up following after her older brother, David, and his best friend, Juan. She always dreamed of a day when she’d be old enough for Juan to look at her as someone other than David’s little sister. But he disappeared at seventeen, after his mother was deported, and Beth thought she’d lost him forever. When she finds him living at the halfway house next door, she knows he’s still the same guy inside. Determined to save him from himself and the RH, Beth sets out to prove that he didn’t commit the crime he was convicted of. But the path to absolution is dark, and even Beth may not be able to discover the real Juan.

Can a man with a damaged soul and a beautiful heart let a woman with fierce loyalty and unwavering love risk it all to save him? Or will his past bury them both this time? 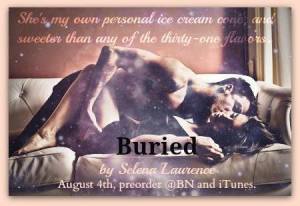 “You’re killing me here, you know that, right?” I move a bit closer to her now, almost near enough to touch.

“Then stop fighting it,” she whispers.

I take the last step, leaving only an inch between us, head to toe. I can see the shine on her sweet cherry lips, and smell the cinnamon in her hair. “It’ll never work. I’ll never be free, and I won’t bury you with me.”

She gazes up at me and there’s so much trust in her eyes, so much faith and pure devotion, it literally steals my breath away. For a moment in time, everything stops. The birds in the trees, the cars rolling by on the street, the sun beating down on my skin. All of it just stops as if someone hit the pause button. I look into her eyes, and I can’t fight it any more than I can fight the gravitational pull that keeps my feet on the ground.

My head tilts incrementally to one side, and lowers, bit by excruciating bit until her breath feathers across my face and my lips meet hers. I press against their softness, hearing the tiny gasp that she makes. The lipgloss is slick, and I can’t help but think of all the other places on both her body and mine that I’d like to make slick. I feel my breathing ratchet up a few dozen notches as my mind goes to static. I haven’t kissed a woman since the night before I went behind bars, and my engine is revving at full-throttle.

But Beth is special—beautiful and strong. If there is one thing I’ve learned working for the RH and living behind bars, it’s how to control myself. When so much around you is out of control, you realize quickly that self-control is one of the best weapons you’ve got. As much as I want to press Beth up against the wall of the house right now and drive every part of me into every part of her, I don’t. I stand stock still, hands fisted by my sides, and I gently, ever so softly, kiss her.

It’s electrifying. Like someone just took a defibrillator to my poor shriveled lump of a heart. It surges to life and screams for freedom—freedom from the past, freedom from the sins, freedom to love this woman. I start to pull away, knowing that touching her more will only make the inevitable loss that much harder, but her hands snake up around my neck and against my lips she murmurs, “No.”

She opens her eyes, lips millimeters from mine. Her long dark lashes sweep up and then down once, as she says, “Yes. We can.”

Before I know what’s happened we’re together from knees to lips, her warm, giving curves molded against me in places that haven’t felt this in so long they’ve forgotten just how amazing it can be.

I put my hands on her waist, willing myself to keep them there. Her fingers play with the short hairs at the nape of my neck, and even as my dick swells and turns hard as a rock, some kind of tension releases from her mouth to me as I stroke along her perfect white teeth. She tastes like the cherry lip gloss and I know that cherry candy will now be my favorite flavor until the day I die.

I can feel her nipples harden against my chest and I push my hard-on into her, desperate for relief. She groans and stands on her tiptoes, grinding her pelvis against me as she does.

My hands move up her sides, my thumbs finding the underneath of her breasts. If there were a form that was considered geometrically perfect, the curve of that sweet spot where her breasts meet her chest would be it. That curve should represent the most complex mathematical equation there is, and God, how I’d love to be the one man to solve it.

The Hiding from Love series

Selena Laurence is the Barnes and Noble Bestselling author of what she likes to call Edgy Contemporary Romance. Her books have been Amazon Top 10 bestsellers in multiple categories including Multicultural Romance, Hispanic Fiction, Urban Fiction, Military Romance, and Romantic Suspense. Her New Adult romance, Hidden, won the 2014 Reader’s Crown Award for Contemporary Romance of the year.

Selena lives in the foothills of the Rocky Mountains and spends a hell of a lot of time at soccer games, on her laptop, and reading. She requires a Mocha Latte every day to function, keeps a goldendoodle at her feet most of the time, and has more kids than she or Mr. Laurence know what to do with.

Selena is also author of the Lush Series, a story of four high school friends who form the rock band Lush.  Take a ride with rock stars, men, brothers, and lovers, as Joss, Walsh, Mike, and Colin discover what it means to succeed, to fail, to hurt, and to love.

For the Love of a Lush

Low Down and Lush