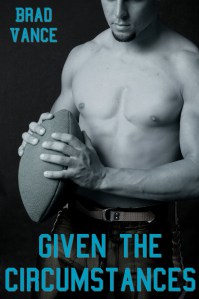 Two promising college athletes meet, each needing something only the other can give him…

When Roger and Brian lock eyes on the first day of school, a friendship is born. Both men are hungry for connection – Brian needs the acceptance, encouragement and support he never had growing up, and when he finds out his new best friend is gay, it brings his own identity into question. Roger needs a big brother, a best friend, but that will never be enough, especially not when he’s this close to big, strong, handsome Brian.

And both men want something more – careers as professional athletes. For Roger, the demands of the closet, the need to reject the love of a man to fulfill his love of the game, will be a crushing burden. For Brian, his downfall will be the substances he uses to get an edge over the competition, and to suppress his gnawing self-doubt and guilt.

One set of desires will bring them together, the other will force them apart…

Just give me another minute, Brian appealed. But his feet didn’t listen, kept propelling him forward, his hand went to the door handle. I’m not ready. It didn’t matter, he knew. He was here, the die was cast, as Caesar had said. He opened the door and walked in.

Look at them, he told himself. Brainiacs. What are you doing here? It was Cal State Berkeley, man. Not Party Hearty State College, where maybe he should have gone. Not Lessing College, where he’d at least been able to keep his scholastic head above water. He had a year of sitting out ahead of him, a year in academia alone for the first time in his life.

There was nobody with a hand on his shoulder, nobody to whisper, “You belong here.” And when he’d made the change and it was too late to unchange it, his blood went ice cold and he thought, What have I done?

Everyone in the classroom was in their own little world, not even looking up at the new guy. Nobody looks at anybody, he thought, anywhere ever. Trying to make eye contact with people on campus was like a contact sport where the goal was to avoid contact. Almost nobody wanted to look at you, nod, smile, say “Hey,” just be…civilized. Like you were going to ask them for spare change, or beg them to join your cult. It was the first time in his life he’d been somewhere he didn’t know anyone. And it sucked.

But one guy in the classroom looked at him right away. A fellow jock, no doubt – another guy always watching the patterns, the movements, making sure no detail of the action escaped his attention. Instinct or ingrained, at this point in their lives it didn’t matter, it was habit, permanent.

The guy nodded, Brian nodded back. The desk on his left was empty, and Brian took it. Something tense unknotted inside him, his first friendly moment of the day, of his new life, something he’d needed like a glass of water.

“Hey, I’m Roger,” Roger said, offering his hand. The guy looked familiar to Brian, his dark hair and big blue eyes, with the ultra-white sclera of a clean-living man, the pale skin of someone who either spent this last summer indoors or had sensitive skin. He looked to be just short of Brian’s own height of six foot four, but not as beefy as Brian. A firm grip, a big hand, a really big hand. Meaty and work-toughened, like his own. Football, Brian thought. Was he a wide receiver? I feel like I should know who he is…

“I’m Brian.” Roger looked at Brian, at his serious handsome face, tanned from a summer outdoors, took in his dark hair and dark eyes, felt his grip match Roger’s own. Put it back, he told himself. But “it” was out, he was young and horny and this guy was…hot. He’s a big bastard, 240 at least. All muscle, heroic shoulders and chest. Rolling on top of you, wrestling with you, pinning you down, one of the one percent of guys in the world who are bigger than you, who can do that, win that fight, the fight you’d put up to make him prove his worth, all the while wanting to lose, refusing to lose, thrilled to lose…

From the beginning of this story I was captivated with the two leads, Roger and Brian. I loved every word of their very real story. It’s well-written, characters are fully developed, real and likeable, the story has a great flow, LOVE Brian and Roger… the sexual scenes are realistic, very sensual and OMG steamy! I also enjoyed the sports aspect (you can tell the author did his homework), but what I liked best is the love story (I’m a girl, what can I say) and Roger and Brian’s romance is one of the best I’ve read in awhile. As I said I was totally hooked right from the beginning. Parts of this story are sad and heartbreaking to read, but much of it, much of them together is just so sigh worthy! I can tell you I hated when it was over and I had to move on. I wanted more!! Brad Vance is a new author to me (and frankly I’m fairly new to M/M romance), but he can consider me a sold-out fan. GIVEN THE CIRCUMSTANCES was an amazing read and he is a talented writer! Excuse me while I cruise his backlist!