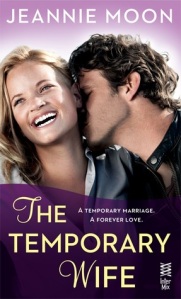 Kindergarten teacher Megan Rossi is devoted to being a mother to her best friend’s five-year-old daughter, Molly. When the child was orphaned, Meg became the little girl’s legally named guardian—over the objections of Molly’s wealthy grandparents, the Campbells. Now the Campbells are petitioning for custody, and Meg is faced with a long and expensive legal battle. The last thing she expects is for her former high school boyfriend—and the Campbells’ estranged son—to offer a solution: marriage.

Billionaire software developer Jason Campbell knows his parents don’t have Molly’s best interests at heart—it’s all about control for them. There is one way he can ensure that his sister’s last wishes are honored. He will offer Meg the protection of his name and lawyers until the custody arrangement has been finalized , then he’ll secure his niece’s future with a very generous divorce settlement. Jason’s considered all the scenarios, except one—that the sparks that once flew between he and Meg might reignite a burning passion. And that his confirmed bachelor heart might just melt away from the heat…

Kudos to Jeannie Moon! THE TEMPORARY WIFE is a wonderful romance story and a promising start for a new romance writer. I really liked the characters, enjoyed the story and loved the HEA all wrapped up ending. Thank you JM for not leaving us with a cliff hanger!! The ending was definitely what pushed me to rating her story 5 stars.

I like so many things, but I’ll start with characters. Molly was adorable. She stole my heart when she called her Uncle Jason on not only his cussing, but the fact he insinuated doing something bad was only wrong if you were caught. Smart girl for five years old.

Jason himself I wasn’t so sure about at first. At about 33% I was talking to my Kindle and telling him to grow a pair. I did not like the way he allowed his friends, especially Harpy, to speak to and about Megan. He kept hoping to convince her he wasn’t that same boy who hurt her, yet he was operating under the same M.O. Then, his way of smoothing it over with her? Sex. Yeah, he started out pretty selfish, but won me over with his persistent good intentions that evolved into him finally pulling his head out. He was always pretty quick to realize when he’d messed up and willing to make changes so his girls were happy.

Megan was genuinely sweet with a huge capacity to love. She was just what Molly and Jason needed. I admit I struggled a bit with how easily she gave into Jay’s seductions. Especially at first. I hate seeing any woman be a doormat or be fooled. But Meg was no fool. And I had to respect that she owned her choices and actions. Without excuse. Well, except that she loved him.

And lastly, Harper. What to say, except she too owned who she was and spoke her mind. She never shied away from what she thought or what she felt was right. As much as I wanted to hate how she treated Meg I had to (A) face that Jay never really gave her a reason to back off until it was almost too late and that responsibility to Meg was on him. And (B) I couldn’t help thinking how good it would be to have her as a friend in my corner. How I can myself be a tad aggressive when warranted. Mama bear, anyone?

As to the storyline itself, I like second chance stories. Don’t we all have at least one person we occasionally wonder about… what if? Also, I’m sure some will disagree but I was glad that what happened to Grace and Mark wasn’t more defined. I was glad Molly’s nightmares or Meg and Jason’s grief was not focused on. IMHO it would have unnecessarily brought the story down. And this wasn’t Grace and Mark’s story. It was Megan and Jason’s. I did appreciate that the story started about eight months after the accident which was enough (for me anyway) to explain away the lack of more raw emotion over the tragedy. And lastly, the HEA. I absolutely loved that it included everyone worth redeeming. That even in those who were unexpected, the basic (and seemingly hidden) good in them came out in the end. Call me a sap but that’s the way I would always have my books wrapped up. Well done, JM!