Anthony Carter has not had it easy in life. In a matter of months, he lost his mother to cancer along with his much coveted spot in a prestigious doctoral program. Swimming in debt, he’s been forced to move back to his hometown in rural Montana and take whatever job he can find. A drunken weekend in Vegas is exactly what he needs to help him forget his problems.

A recent break-up with her boyfriend of nearly a decade has left straight-laced Liz Rockwell disillusioned with love and in desperate need of a vacation. She gets more than she bargained for when one drunken night at a Vegas bar results in her being married to Anthony. Embarrassed by her lapse in judgment, Liz is ready to make this whole night just go away. A quickie divorce seems like the best solution to their problem, until Anthony realizes who Liz really is.

Known in the media as the Candy Heiress, billionaire Liz is the answer to Anthony’s prayers. All he has to do is convince her to write him a check. Unfortunately, Liz is not one to be easily intimated or coerced. Discovering the Rockwell family secret may be Anthony’s only hope. But the more time he spends with the intelligent and tenacious Liz, the more he realizes their chapel wedding may not have been such a drunken mistake after all…

Excerpt from How to Catch an Heiress

“Oh, I see. You think he’s way out of my league.” What? No way! She had it completely backwards.

“No, Liz.” Grasping her arm, I whirled her around to face me. This was important and I had to make sure she understood me. “You’re a neutron star, remember? You’re so far out of his league, you’re not even in the same galaxy. Men like him are usually intimidated by women like you. They don’t like women who have the potential to be more successful than them. They like women like Karen: meek, cowering, and willing to defer to their oh-so-superior judgment.”

She stared at me for the longest time, so long reality set in and I started to feel foolish because I was still holding her by the arm and we were standing in the middle of a crowded street in South Beach. Swearing, I let go of her and took a step back.

“Are you flirting with me?” She demanded. “Because if you are, it won’t work. That kiss meant nothing to me and I’m still divorcing your broke ass in less than two weeks.”

Choking on a laugh, I waved down the next cab I saw. “Princess, you have yet to see me flirt.” Holding open the door for her, I waited to scoot in after her. View’s a hell of a lot better that way. “If and when I decide to flirt with you, there’ll be no questioning on your end.”

Natalie can’t sing. Or dance. Or play an instrument. She can’t ride a bike and doesn’t know how to swim or drive. As a result, her husband often asks “Are you sure you’re not really from Mars?” (the answer, in case you were wondering, is no. Unless New York counts as another planet). When she’s not geeking out at her day job, Natalie can be found attempting to wrangle her overly energetic Westie, baking ridiculously chewy chocolate chip cookies, and watching so-bad-it’s-good reality television shows. 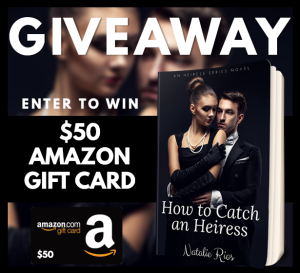 ~Check out MsChris1161’s reviews on Goodreads~