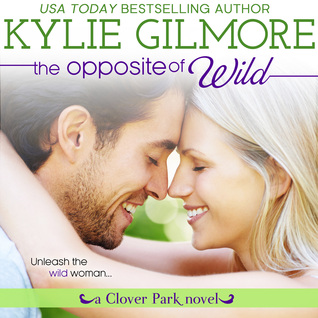 THE OPPOSITE OF WILD
(Clover Park #1)
by Kylie Gilmore

Ex-cop Ryan O’Hare takes one look at buttoned-up control freak Liz Garner and just itches to loosen the woman up. Not that he’s into her. Because a woman like that comes with way too many expectations. Not to mention, she practically works for him, and he didn’t hire Liz to watch after his beloved Harley-stealing Gran so he could turn Liz loose in his bed. Still, there’s something about her, a hidden wild side, that makes him wonder what it would take.

Liz must be crazy to work for the insensitive, arrogant, horribly…hot man she’s avoided for years. Unfortunately, she needs the money and Ryan’s grandmother needs a keeper. (Midnight tango lessons and ziplines with Gran, anyone?) Ryan’s rare smile and swaggering confidence have Liz torn between throwing her favorite pinot grigio at his head or throwing herself at him. Can this control freak find a way to let loose with the tough, no-strings guy who once broke her heart?

THE OPPOSITE OF WILD by Kylie Gilmore
My rating: 4 of 5 stars

Great book! Kylie Gilmore’s THE OPPOSITE OF WILD was a well written story of Liz Garner and Ryan O’Hare unexpectedly falling in love amidst a handful of quirky, oftentimes hilarious, secondary characters and well, life. I was lucky enough to listen to the audiobook version and the narrator did a fantastic job. The varying nuances for each character were clear and contributed to my enjoyment of the story.

Mostly I loved that this story was in no way cookie-cutter or predictable. I thought it would be sweet… and it was, but it was also steamy. I thought Liz would be stuffier and well, prudish even, but no way. She was definitely the responsible sort, but she also had backbone, could be adventurous and had a serious heart for accepting the people in her life for who they were. Ryan also had a few surprises up his sleeve. Ms. Gilmore gave him depth you don’t always find in such an alpha lead. And as much as this was all about whether or not Liz and Ryan were going to be willing to take a chance on each other, it was so much more. Seems there was a plot twist every few chapters which really kept my interest. And honorable mention must go to Ryan’s Gram. Maggie O’Hare was a hoot and did her best to steal the limelight. Definitely the way I hope I have the guts to be when I’m in my 70’s. Overall fun and very romantic! 4 stars

Check out more reviews from MsChris1161 on Goodreads

Kylie Gilmore was lucky enough to discover romance novels at a young age as they were strewn all over the house (thanks, Mom!). She writes quirky, tender romance with a solid dose of humor. Her Clover Park series features the O’Hare brothers, three guys you’d definitely have a drink with and maybe a little more.

Kylie lives in New York with her family, two cats, and a nutso dog. When she’s not writing, wrangling kids, or dutifully taking notes at writing conferences, you can find her flexing her muscles all the way to the high cabinet for her secret chocolate stash.

Join her newsletter to hear about New Releases