Wingman rule number two: never reveal how much you want them.

Lex hates Gabi. Gabi hates Lex. But, hey, at least the hate is mutual, right? All Lex has to do is survive the next few weeks training Gabi in all the ways of Wingmen Inc. and then he can be done with her. But now that they have to work together, the sexual tension and fighting is off the charts. He isn’t sure if he wants to strangle her or throw her against the nearest sturdy table and have his way with her.

But Gabi has a secret, something she’s keeping from not just her best friend but her nemesis too. Lines are blurred as Lex becomes less the villain she’s always painted him to be…and starts turning into something more. Gabi has always hated the way she’s been just a little bit attracted to him—no computer-science major should have that nice of a body or look that good in glasses—but “Lex Luthor” is an evil womanizer. He’s dangerous. Gabi should stay far, far away.

Exclusive EPIC news about this AMAZING RELEASE HERE.
(Kindle in Motion refers to Kindle books that include added visual features, such as art, animation and video. The features can be viewed on compatible Fire tablets and the free Kindle app for iOS and Android. You can switch features on or off at any time.)

“So,” a familiar voice said above the music. “New job?”

Damn it! “I didn’t even say your name three times!” I whined, turning around to face Lex. He was wearing a tight vintage black T-shirt with low-slung jeans on his hips and the ever-present sex-oozing smile.

His eyebrows drew together. “Somehow all of those sound like very familiar noises women make in my presence.”

“That’s new.” He snapped his fingers. “But it’s growing on me. Maybe it’s the way you say it, like you want me to die in your arms all Romeo and Juliet style…”

“Wow, ten at night and you’re already wasted.” I slapped him on the shoulder. “Take a cab.” I tried to move past him, but he grabbed my wrist and pulled me back, pressing us together. Whether it was on purpose or not I wasn’t sure, but he was warm.

And he felt . . . safe, familiar. My body was playing tricks on me; it was because I was vulnerable.

I locked down my memories, especially that one, and threw away the key. “Lex, what do you want?”

“You,” he said in a serious tone. “Now get up on stage and take off your clothes. I paid for a show.”

I rolled my eyes. “Waitress, Lex. You’ll have to call one of the many numbers on your phone to get a free lap dance.”

“What if I pay?” His breath tickled my ear as my eyes burned with unshed tears. Normally, I wouldn’t let what he did affect me. Normally, I brushed him off, but my armor had already been stripped. Call it exhaustion or maybe just the last remnants of pride I had toppling to the floor.

But I couldn’t hold them in any longer.

I tried to wipe them, tried to jerk free from Lex’s strong arms, but he turned me so abruptly that all I managed to do was soak the front of his shirt with my tears and smear it with mascara.

“Gabs?” His voice rasped as he hugged me tighter. “Come on, we’re going.”

“No.” Panic surged through me as I tried to pull away. “You don’t understand!” I’d given the last of my paychecks to my mom so she could pay the bills at the house, leaving me completely broke for this week’s rent check. I was hoping to make enough money in tips for the rent.

Lex’s eyes crinkled at the sides as he took one look at me and the rest of the seedy bar. I knew what he saw: girls dancing on poles, guys getting drunk and shouting at the girls while they threw dollar bills onto the stage, and a scared, stupid girl clinging to him like her lifeline.

Finally, he released me. “Gabs, I’m sorry, I was joking. We always—” He licked his lips and glanced down at the filthy floor, cursing. “Where’s the money going?”

“New girl!” Dean, my boss, never called me by name, the idiot. “You working or flirting? If he wants time with you, he’s gotta pay.”

I held up my fingers to indicate I needed a few more seconds, but Dean was apparently in a mood and stomped over to us.

“Problem?” he asked, crossing his arms over his skinny chest. The guy was small; Lex could probably break his face blindfolded.

“Yeah,” Lex said, surprising me. “Your waitress just refused to dance with me because you guys are out of private rooms . . . so.”

Dean’s eyes narrowed. “You her boyfriend?”

“Do I look like a man who wants to commit to crazy?” Lex fired back. “But I do have this . . .” He reached into his back pocket and pulled out what looked like at least six hundred dollars in cash. “How long will that get me with your waitress?”

Dean’s eyebrows kissed his hairline as he sputtered out, “At least three hours.”

“I’ll add in another six hundred if I can have table service and a private room, no interruptions.”

“Done.” Dean snapped his fingers above his head as one of his security guards came barreling over. “Please take them to the Diamond Room, no interruptions. Stand outside the door. One waitress goes in and out to provide drinks.”

And five minutes later I was stuck in a personal nightmare. A bottle of champagne rested on ice; two glasses were left on the table. Music pumped through the speaker system. A small stage was set up in the middle of the room, with two poles and some sort of swing that dropped down from the ceiling. I seriously didn’t even want to know what it was for.

“That will be all,” Lex said in a gruff tone. The waitress—I think her name was Holly—bobbed her head, then looked at me out of the corners of her eyes as if scared to leave me alone with the giant.

“It’s fine.” I waved her off and forced a smile.

“Stop pacing.” Lex grabbed a bottle of champagne. “And that ass better give you part of that money…”

“Huh?” I turned. Lex had his feet up on the table and was texting. TEXTING.

He glanced up. “What? Something wrong?”

“No I didn’t,” he said calmly. “Nobody knows what goes on in here. Take a nap for all I care, drink some champagne—or you can shock the hell out of me and cry again, but fair warning, I only had one hug in me tonight and you stole it, so… I’ll be reverting to the back pat.”

“Lex Luthor, philanthropist by day and rescuer of hot waitresses by night.” He smirked and held up the bottle. “Champagne?”

“Unbelievable.” I choked out a laugh. “You just paid over one grand to sit in a crappy club and drink champagne with someone you hate.”

“It’s my good deed for the decade. Just don’t tell Ian. He’ll think I’m sick or something, and the last thing I need is Mother Hen helicoptering around my inner sanctum. He’ll get pissed all over again if he finds out that I’m hacking.”

My skin felt sticky and sweaty, and my feet ached. With slow movements, I made my way over to the couch and sat, not even wanting to know how many germs were on the leather.

“So,” Lex said above the music. “Champagne? Or want me to order you something else?”

“Champagne’s good.” I swallowed and looked down at my hands. “I’m sorry I cried.”

“Finally admitting you have one?”

“Or dancing,” I muttered.

“Hah.” Lex laughed, actually laughed as if it was funny. “No offense, Gabs, but you’re not like those girls on stage. You can’t . . . you just can’t.”

Lex laughed harder. “Gabs, look, there’s nothing wrong with being innocent. Lots of guys dig a girl who has fields that have never been touched, watered, planted, plowed—”

“But those types of girls, the good girls, the ones who’ve never been…” He smirked. “Conquered? They don’t typically know how to use their bodies in a way that mimics sex on stage. Get it?”

“Bad example, bad mental picture all around, Gabs, again solidifying my point. Good girls don’t dance, not like that.”

When I didn’t say anything, he added, “Embrace your goodness, don’t get pissed. It’s a compliment.”

“Damn, I love it when you swear,” Lex murmured, taking a long draw of champagne. “See, at least you do that right.”

“I can’t last in here for three hours,” I muttered, jumping to my feet and starting my pacing all over again.

“Want to play games on my cell phone?”

“Like a child!” I blurted. “That’s it! You’re treating me like I’m… a toddler! Like I should be thankful you just saved me from hell. Be honest: if you had a sticker and a sucker, would you give them to me if I shut my mouth the entire time?”

Lex gave me a guilty look.

“Well, if you were a dude, we’d be having a different conversation and you probably would have punched the guys grabbing your ass earlier . . .”

Without thinking, I grabbed my glass of champagne, chugged it, poured another, chugged that one, then with shaky hands grabbed the little remote, turned up the music, and jumped on stage.

I expected Lex to say something inappropriate or at least roll his eyes. Instead, he looked . . . panicked.

“Oh, I’ll get down!” I grabbed the pole with one hand and leaned back. “Just wait.” 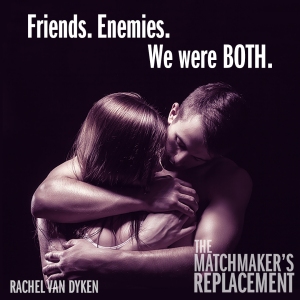 RACHEL VAN DYKEN is the New York Times, Wall Street Journal, and USA Today Bestselling author of regency and contemporary romances. When she’s not writing you can find her drinking coffee at Starbucks and plotting her next book while watching The Bachelor.

She keeps her home in Idaho with her Husband, adorable son, and two snoring boxers! She loves to hear from readers!

You can connect with her on Facebook or join her fan group Rachel’s New Rockin Readers. Her website is http://www.rachelvandykenauthor.com.