It’s Release Day for TWO BLUE LINES, the first novel in the Crossing the Line series!

Crossing the Line is a Young Adult series by S. C. Montgomery

SC Montgomery has created an emotional tale of first love, difficult choices, and impossible secrets.
A deliciously angsty debut you need to read for yourself.

His fear . . . Her secrets . . . Their choice.
What if the only girl you’ve ever loved lied to you?
Lied to everyone?
Those two blue lines changed everything for Reed Young and Melissa Summers. In more ways than one.
And now, he must decide for himself . . .
Man up or walk away?

Two Blue Lines is the emotional, honest story of two teenagers whose lives are about to change forever. While not glorified, or portrayed in detail, there are themes of sexual assault and teen pregnancy, as well as allusions to teenage drinking and some foul language. It is all meant to create an honest, relevant novel, but please be aware and read only if you’re comfortable. 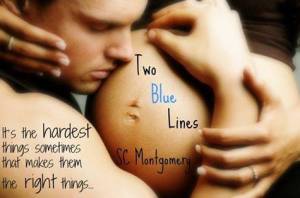 Tears filled her eyes, reflecting the kaleidoscope of colors from the sky above. “I don’t know what I’d do if I ever lost you.”
I scooted over and pulled her close. “Why would you lose me?” Okay, sure, I’d had the fleeting thought of running for the hills, but I’d never leave her. Baby or not. My heart was too fully invested. God, didn’t she realize she was the first girl I’d ever kissed? She was the first person I thought about in the morning, the person I wanted to call when I was happy, when I was bummed . . . Melissa Summers had become my everything since I laid eyes on her in that middle school cafeteria. I couldn’t think of one single solitary thing that could make me leave her now. Besides, I had a responsibility to this baby.
She threw her arms around my neck and her tears soaked through my T-shirt. “What if you decided you hated me or the baby? What if . . . ?” She choked on a sob as I squeezed and shushed her.
“It’s okay, Mel. I’m not leaving you, and I could never hate you. Never. Or the baby. How could I?” I stroked her back as the fireworks popped furiously above us in a resounding finale.
It finally grew quiet, the smoke from the show settling down over the water, people around us mumbling and picking up their chairs. I continued to hold her, my eyes straying to a couple holding hands as they strolled, another not holding hands, not touching, obvious tension shimmering between them as they towed a fussy toddler. My heart ached that I couldn’t do more to ease her. “God, Mel, I love you so much,” I whispered, wishing she’d believe me. Wondering why she’d suddenly doubt. We may be in a heap of trouble, but I never wanted to lose the spark that made us. Even at sixteen, I knew it was special.
She finally pulled back and looked up into my eyes. I used the pad of my thumb to wipe the tears from her cheeks. She simply stared for several moments. We said nothing. I let her look. Maybe she’d find whatever reassurance she was seeking. Then, gently, her eyes slipped down to my mouth. I leaned in and kissed her, giving her all the love, all the promises, all the comfort I had.
And all the hope.

SC Montgomery is a self-proclaimed nerd and readaholic. She has dabbled in telling stories since she was very young by letting her imagination play out with her Barbie dolls and her bestie many a weekend. She also writes Contemporary adult romance under the pen name Shauna Allen, and it was in one of those novels that the YA bug bit when she wrote in a teenager loosely based on her own son.

Her first story, The Summer of Lettie, was penned as a gift for her mother, but was published with her blessing, and it’s just taken off from there.

SC is married with three teenagers of her own, who give her plenty of inspiration and advice, and are a constant source of laughter and new terminology.

Besides writing, she loves reading, movies, singing and dancing reality shows and going to the beach.

Praise for Two Blue Lines:
An emotionally intense story about two teens having to grow up way before their time . . . Hard to put down, this story will stay with you for a long time.
-New York Times bestselling author C.C. Hunter