Some rules are meant to be broken…

It’s rule breaker Emily Foster’s birthday, and like everyone at The Jungle Room, she just wants to get some action. Unfortunately, she stumbles on the wrong kind, witnessing a mob hit. To protect her, she’s entered into the Witness Protection Program with by-the-book Special Agent Jake Ward as her chaperone.

When the location of their safe house is compromised, Jake stashes Emily deep in the Texas backwoods. The city-girl might be safe from the Mafia, but she has to contend with a psychotic rooster, a narcoleptic dog, crazy cowboys, and the danger of losing her heart to the one man she can’t have.

Jake’s as hot as he is infuriating, and she can’t help but push all his buttons to loosen him up. Their mutual, sizzling sexual attraction poses a dilemma: Jake’s determined to keep her safe and out of the wrong hands; she’s determined to get into the right ones — his.

Check out this cool Book Trailer for Rules of Protection on YouTube!

Thanks to a certain author who wrote an absolutely fabulous could-not-stop-reading-until-I–finished-it-book, I missed an entire night of sleep. I was dragging all day at work, and I should know better than to start a new book so late at night, but All Worth It! LOVED, LOVED, LOVED the RULES OF PROTECTION!! Debut author, Alison Bliss, has given her readers gold! Pure Gold!! You do not want to miss this incredible love story!

It starts out with her heroine, Emily, out with her friends in a crowded club to celebrate her birthday and they are trying to convince her she should hook-up, but she’s not so sure. A tall, mysterious, handsome guy (Jake) catches her eye from across the room, but another guy approaches her and comes on strong. She tries to ditch Sergio, the second guy, and finally succeeds with a little help via an impromptu ravenous kiss from Jake. That kiss might have been meant to throw Sergio off, but it sets off the sparks to the chemistry flowing between Emily and Jake. When Emily decides to follow Jake deeper into the club she inadvertently witnesses a mob hit. Once again Jake comes to her rescue by getting her safely out of the club. Turns out he’s with the FBI and there undercover to watch Sergio and his mob boss. It becomes his job to get Emily safely into Witness Protection and keep her safe until it’s time for her testimony. When Plan A doesn’t work out he has to improvise and comes up with Plan B, in other words he drags the City girl off to the middle of nowhere where she is completely out of her element. The suspense plot of this story is so brilliantly written, with plenty of twists and turns, it will keep you guessing until the end who can and can’t be trusted.

Emily and Jake seem like complete opposites, he is a rules guy who always goes by the book, and takes his responsibility of keeping Emily safe very seriously. It was easy to fantasize about him and his smoldering sexiness with his body of solid muscle and his take-charge alpha male personality, perfectly melded with his charming and sweet country boy manners. Visualize, I meant visualize his tough guy persona. Emily on the other hand, hates rules and prefers to live by impulse with her wit and snarkiness to guide her. She had me laughing so hard throughout the book with the things that would come out of her mouth. That girl had no filter and it was hilarious. There’s a line about hacky sacks that had me holding my stomach it was so funny. Granted, I admit there was also a few times I wanted to smack her, but that’s okay, I still loved her. She could come off a bit flaky, but that girl had courage to spare, and she was not without her own charms. These two are both stubborn, strong-willed and determined to be the one in control. Emily drove Jake crazy and vice versa and not just because the sexual tension was off the charts between them. Ms. Bliss tormented this reader with all the near misses before these two finally giving in to what was so obviously between them, heck it felt like I was the one being denied.

Truthfully, in every way it felt like I was right there in the story, with Jake and Emily, experiencing all that was happening in this dynamic fast-paced book. Ms. Bliss’s smooth flowing writing was emotionally intense, humorous, intriguing and completely mesmerizing. From running from the danger, laughing with their family and friends, experiencing the frustration of being in hiding, there was never a dull moment and I was engrossed from beginning to end. The secondary characters, both Jake and Emily’s friends and coworkers, were very well developed with distinctive personalities. I was equally captivated by and curious about Junior, Cowboy, Ox, Judd, Gina, Dale and Bobbie Jo. They definitely added to the situational suspense AND humor. The dialogue was brilliantly filled with the kind of easy conversation you recognize as only coming from good friends. Rules of Protection is a stand-alone novel, but I want more of them all and am so happy to know there are more Tangled in Texas books coming! 5 delighted stars!! 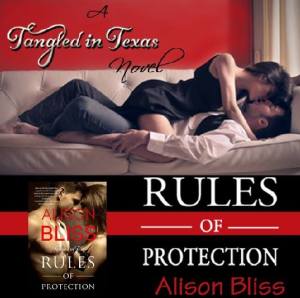 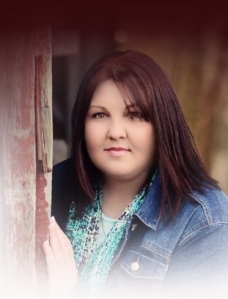 Alison Bliss grew up in Small Town, Texas, but currently resides in the Midwest with her husband and two sons. With so much testosterone in her home, it’s no wonder she writes “girl books.” She believes the best way to know if someone is your soul mate is by canoeing with them because if you both make it back alive, it’s obviously meant to be. Alison pens the type of books she loves to read most: fun, steamy love stories with heart, heat, laughter, and usually a cowboy or two. As she calls it, “Romance…with a sense of humor.” She loves to read anything with a good love story and great sex!

To learn more about Alison Bliss, visit her website at http://authoralisonbliss.com, where you can sign up for her newsletter to keep up with her latest book news. You can also email her at authoralisonbliss@hotmail.com.