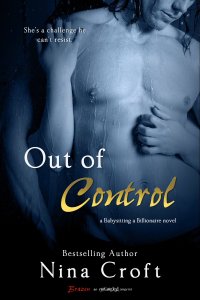 She’s a challenge he can’t resist.

Hollywood heartthrob Zachary Hunter loves women—as long as they don’t want more than a little fun in the bedroom. When his most recent movie stirs up the wrong kind of attention, the kind that includes an attempt on his life, he hires a friend’s company to locate the threat. The pint-sized redhead assigned to protect him isn’t what he expects—or wants. Worse, he can’t take his eyes off of her.

After ten years in the army, Danielle Sinclair knows how to handle men. With a new security gig to pass the time until she’s cleared to return to the military, she’s figures her sexy new client will be easy to manage. And then he opens his gorgeous mouth, and she can’t decide whether to kiss him or kill him. His sex appeal may tempt her into his bed, but his sexist attitude is unbearable, and she’s going to make him eat every single word…

This is a great story with a smart, sassy and very independent though slightly broken heroine, Dani Sinclair. An army sergeant who was injured in a blast and awaiting medical clearance to get back to the only place she’s ever felt comfortable and as though she belonged. In the meantime, she agrees to be part of the protection team for Zachary Hunter, famous writer and ladies man, who angered the wrong people with the depictions and storyline of his latest book.

Dani’s first sight of him is as he is laying facedown naked on a large air mattress wrapped around an equally naked blonde in the middle of his pool. She might not have the best impression of his habits, but can’t help but like what she sees. Zach is tall, gorgeous, with an athletic body, and charm to spare. He is also arrogant and used to having anything he wants, including women, and he wants the prickly little redhead even if she does tell him she thinks he’s nothing but an asshole playboy.

Dani tries to resist Zach’s pursuit, but he is undaunted. It helps that they are all but secluded at his beautiful villa in Spain, a perfect place for a romantic seduction. Dani finally accepts her intense attraction to Zach and decides this little break away from her normal reality is the perfect time to have a romantic interlude and gain a little experience, something she is completely lacking, and who better than an insanely hot, sexy man?

This is definitely a case of opposites attracting, but it works. Despite Dani’s tough facade, Zach sees through to her vulnerabilities and it brings out a strong protective instinct in him. He also likes that she’s not after what he has, she only wants him for his body and sexual skills. That is until he begins to care for her and finds he doesn’t like knowing she could walk away and not look back, even though that’s what he’s done with countless women before her. In Zach, Dani finds a comfort, affection and acceptance she’s been craving. I liked both characters very much and was happy to see them get their HEA.

I enjoyed reading OUT OF CONTROL by Nina Croft, the second book in her Babysitting a Billionaire series. It brings in characters from the first book in the series, which I have not read, in such a way that adds to the main story and provides insight without making the reader feel like they missing important details. 4 stars

~Complimentary copy provided in exchange for a honest review.