THE LADY TRAVELERS GUIDE TO SCOUNDRELS AND OTHER GENTLEMAN
(The Lady Travelers Guide #1)
by Victoria Alexander
Published: June 1st 2017 Really, it’s too much to expect any normal man to behave like a staid accountant in order to inherit the fortune he deserves to support the lifestyle of an earl. So when Derek Saunders’s favourite elderly aunt and her ill-conceived—and possibly fraudulent—Lady Travelers Society loses one of their members, what’s a man to do but step up to the challenge? Now he’s escorting the world’s most maddening woman to the world’s most romantic city to find her missing relative.

While India Prendergast only suspects his organization defrauds gullible travelers, she’s certain a man with as scandalous a reputation as Derek Saunders cannot be trusted any farther than the distance around his very broad shoulders. As she struggles not to be distracted by his wicked smile and the allure of Paris, instead of finding a lost lady traveler, India just may lose her head, her luggage and her heart. 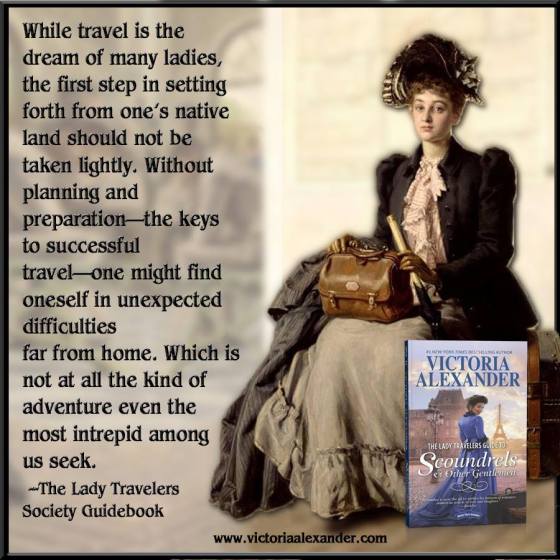 “Alexander celebrates the spirit of adventure, elevates dubious scheming with good intentions, and advocates for the yielding of judgment and practicality to hedonism and happiness. Readers will savor every page.” ~Publisher’s Weekly Starred review

“Readers will immediately find themselves thoroughly disarmed by Alexander’s deliciously droll wit and flair for clever characterization, both of which are on full display in this exceptional start to the author’s sparkling new Lady Travelers Society series.” ~Booklist starred review

THE LADY TRAVELERS GUIDE TO SCOUNDRELS AND OTHER GENTLEMAN
by Victoria Alexander
My rating: 5 of 5 stars

*sigh* I truly loved this book. Victoria Alexander’s novel, THE LADY TRAVELERS GUIDE TO SCOUNDRELS AND OTHER GENTLEMAN, has reminded me why I dearly love historical romance. She has magically taken me away to another time, another place, another way of doing things and saying things, and while doing so made me smile and yes, sigh. At many places in the story, specifically in the dialogue and witty banter, I thought to myself how Ms. Alexander’s prose and characterization were very much like my beloved Jane Austen’s. I have read many books, including others by Ms. Alexander and have never thought this before. The Lady Travelers Guide to Scoundrels and Other Gentleman was simply charming. The writing nearly flawless, the characters and plot well developed, the situations and scenery artfully detailed so as to seem I was visualizing scenes played out before me. Miss Prendergast and Mr. Saunder’s journey to find her cousin, Lady Helouise, turns into a grand adventure indeed. I’m so glad I went along. I strongly recommend you do too. *Complimentary copy downloaded from NetGalley. All opinions expressed are mine alone. 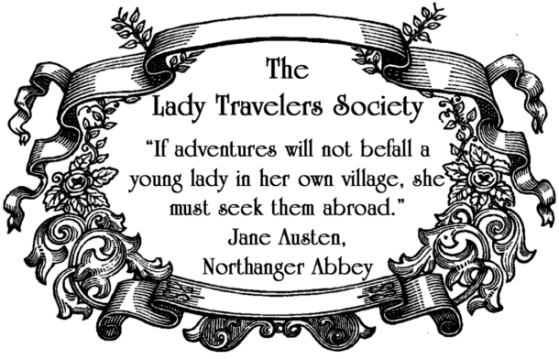 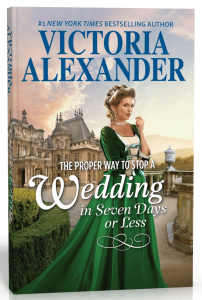 The Proper Way to Stop a Wedding in Seven Days or Less
(The Lady Travelers Guide #.5)
Settle in for a wicked romp in this captivating installment of The Lady Travelers Society series by New York Times bestselling author Victoria Alexander.

The family of the bride is expected to revel in the joy of the upcoming wedding. Instead, Miss Celia Bromley faces a heartbreaking dilemma—she’s fallen in love with the man engaged to marry her scheming half-sister. Worse, he might love Celia in return. But handsome, bookish Henry Saunders is a man of honor. He would never break his promise to his bride-to-be, no matter how horrid she may be.

But Celia’s heartache hasn’t escaped the notice of keen-eyed Aunt Guinevere who, along with her crafty friends are determined to see true love triumph. Unraveling a wedding takes a delicate, subtle touch, and in the mad dash to break one engagement and encourage another, the ladies and the bridal party may well hear the whispers of scandal instead of the peal of wedding bells…

VICTORIA ALEXANDER was an award winning television reporter until she realized that fiction was far more fun than real life. She turned to writing full time and has never looked back.

Since the publication of her first book in 1995, she has written twenty-three full length novels and six novellas. The Perfect Wife—originally published in 1996 and reissued in March 2008—hit #1 on the New York Times list. Sixteen of her books are bestsellers hitting the New York Times, USA Today and/or Publishers Weekly bestseller lists. With books translated into a dozen different languages she has readers around the world and has twice been nominated for Romance’s Writers of America prestigious RITA award. In 2009 she was given a Career Achievement Award from RT Bookclub and was named Historical Storyteller of the year in 2003. In 2008 she was the keynote speaker for the Romance Writers of American annual conference in San Francisco. Victoria credits much of her writing success to her experiences as a television news reporter.

Victoria grew up traveling the world as an Air Force brat. Today, she lives in Omaha, Nebraska with her husband, a son in college and a daughter working in film. She has two bearded collies, Sam and Louie (named from characters in one of her books) who believe they’re human, a house under constant renovation and the accompanying parade of men in tool belts. And never ending chaos. She laughs a great deal—she has to. 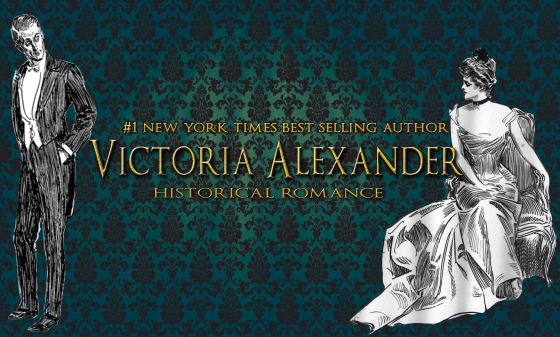