Ava Vaughan is back to see her sexy estranged husband Cole Jacobs, for one thing – to get a divorce. After living apart for the last six months the time has come to move on and start her life over. When she confronts Cole the last thing she expects is for him to say No.

Cole isn’t ready to let go of Ava. He comes up with a plan that will keep her by his side and help her fledging event planning company. Once the job is over he will give her the divorce she wants.

Only working together brings buried feelings to the surface forcing them both to face the reasons why their marriage fell apart. Suddenly letting go isn’t as easy as either one thought. 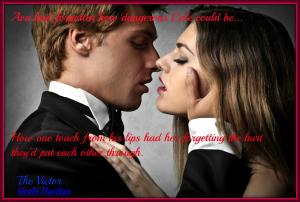 Fantastic start to Nicole Flockton’s new series featuring the leaders of a Freemasons Lodge on a private mission. Loved the air of mystery she sets. This first book sets the stage for the ongoing storyline regarding this mysterious cause the Freemasons are privately pursuing, under the cover of publicly supporting a charity for homeless and runaway teens. However, in THE VICTOR, this mystery takes a back seat to the love story of Cole Jacobs and his estranged wife, Ava Vaughan. Each successive book will focus on a love match for each of the four leaders and friends.

Cole and Ava have been estranged since the beginning of their marriage when a tragedy comes between them. Each remains in love with the other, but both have their troubles with communication and doubts so they’ve remained separated. The Freemasons charity event becomes a welcome excuse to attempt a second chance. Ms. Flockton weaves a tale of ups and downs with moments of real connection and passion, but then plenty of miscommunication that made me wonder to the very end if these two would work it out or not.

I’m looking forward to reading Dominic’s story in The Hunter, the second book in the Freemasons series. 4 stars

Fuck it. I need this drink.

He lifted his glass and downed the contents in one swallow. He carefully placed his empty glass back on the bar and swiveled again so that he brushed her knees with his. “What exactly are you sorry about, Ava? Sorry for walking out when I was hurting as much as you? Sorry for not being by my side while I buried my father? Or sorry for asking me for a divorce when I’m about to face a roomful of people? I’d really like to know.”

Her eyes had widened with every word he spoke. In the muted light of the bar he could almost convince himself he could see remorse in her eyes. But she’d known exactly what was happening at this hotel tonight. She’d known what she planned to say to him.

“Really?” he drawled. “You thought it was time. After six months of avoiding my calls, not answering my emails, you decided tonight was the night.”

“Okay, so maybe tonight wasn’t the best place to talk to you.”

He laughed harshly. “Did you honestly think I would be all sweetness and light about this?”

“I’d hoped you would’ve been more reasonable about things.”

“Baby, I stopped being reasonable,” he flicked back his shirt cuff and looked at his watch. “About five hours ago.”

In the back of his mind Cole knew he was being the asshole she called him. He never let his emotions get the better of him. He had a reputation for his cool head in uncomfortable situations. Tonight, after her request for a divorce, he relinquished his normal ironclad control over his emotions and let them run free.

“Fine. I’ll call your office and make an appointment like you asked me to.” Ava stood to go. Her leg knocked his and heat shot through him. His body stirred to life at her touch. He couldn’t let her go without tasting her again.

Cole reached out and wrapped his fingers around her wrist, halting her departure.

“What?” she demanded. “You got what you wanted.”

“No I haven’t.” Cole stood and tugged her until she was flush against him. His body relished having Ava close again. Without thinking what he was doing, he placed his hands on either side of her face, tilting her head up.

“Cole?” she whispered, as he closed the gap and took possession of her slightly parted lips.

At the first touch and taste of her, recollections he’d pushed deep into the far recesses of his mind came forward, reminding him of what they’d once shared. As Ava opened her mouth beneath his, everything around him faded. All he concentrated on was the woman in his arms.

She tasted sweet. A hint of strawberry from her lip balm and a lingering tartness from the slice of lemon in her club soda mingled together to entice him. He pulled her closer. Her body fit perfectly against his. He sunk his fingers into her silky tresses, remembering how her hair had felt brushing his skin as they’d made love. She moaned and his body responded immediately.

He’d fooled himself into thinking he could be happy without her in his life. How wrong he’d been. Holding her again only reinforced how much he wanted her. He wanted to drag her upstairs and take her over and over again. It had been too long since they’d shared a bed. Would Ava be open to spending the night with him if he suggested it? It seemed so. It was probably the worst thing for them to do after not seeing each other for so long. But it also could be the right thing too.

He needed to think with his head, not his dick.

Cole pulled his lips away from Ava’s, keeping his arms loosely around her waist. Plans needed to be made. But before he started planning, he had something to say to Ava.

“Divorce is not an option.” 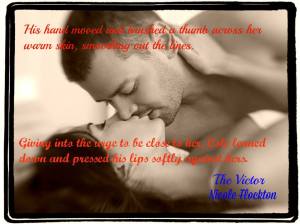 Bestselling author Nicole Flockton writes sexy contemporary romances, seducing you one kiss at a time as you turn the pages. Nicole likes nothing better than taking characters and creating unique situations where they fight to find their true love.

On her first school report her teacher noted “”Nicole likes to tell her own stories””. It wasn’t until after the birth of her first child and after having fun on a romance community forum that she finally decided to take the plunge and write a book.

Apart from writing Nicole is busy looking after her very own hero – her wonderfully supportive husband, and two fabulous kids. She also enjoys watching sports and, of course, reading.

~PLACES YOU CAN FIND NICOLE~