Tasty Book Tours is THRILLED to Reveal the cover for Book One in the upcoming Rescue Squad Series by Kimberly Kincaid…..RECKLESS 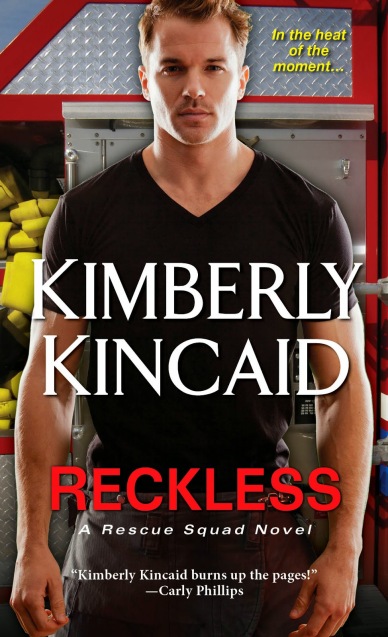 SOMEONE’S BOUND TO GET BURNED…

Zoe Westin may be a fire captain’s daughter, but feeding the people in her hometown of Fairview is her number one priority. Running a soup kitchen is also the perfect way to prove to her dad that helping people doesn’t always mean risking life and limb. But when she’s saddled with a gorgeous firefighter doing community service after yet another daredevil stunt, the kitchen has never been so hot.

Alex Donovan thrives on adrenaline, and stirring a pot of soup doesn’t exactly qualify. He’s not an expert at following the rules either, not even when they come from the stubborn, sexy daughter of the man who’s not only his boss, but his mentor. Determined to show Zoe that not every risk ends in catastrophe, Alex challenges her both in the kitchen and out. One reckless step leads to another, but will falling for each other be a risk worth taking, or will it just get them burned?

*A Special Note from Publisher*

Kimberly is releasing JUST ONE TASTE, A Pine Mountain Novella on May 26th, 2015. Kensington Books is offering a fun exclusive deleted scene to anyone who pre-orders the novella!  Just sign up here, http://sites.kensingtonbooks.com/justonetaste/, and you will be emailed the deleted scene from JUST ONE TASTE!

A little home improvement can go a long way…

Jesse Oliver was a medic in Afghanistan, but back home in Pine Mountain he’s happy to switch gears as the Double Shot bar’s new sous chef. When his apartment floods and his old Army buddy offers the family’s dilapidated lake house as temporary quarters, Jesse thinks a little remodeling on the creaky duplex sounds like a fair return favor. That’s before he sets eyes on the gorgeous woman moving into the other side of the cabin—and discovers she’s his buddy’s kid sister, a.k.a totally off limits.

Kat McMarrin has fought hard for her space, and she’s not too interested in sharing it. Of course, her job as a physical therapist means she won’t see much of Jesse, even if he’s a few thin floorboards away—unless she seeks him out. And with his sculpted body and slow-burn gaze, she might be tempted. Maybe the fixer-upper projects she has planned for the cabin will keep her mind off him. Or maybe her instincts to strip the place down will get out of hand…

Kimberly Kincaid writes contemporary romance that splits the difference between sexy and sweet. When she’s not sitting crosslegged in an ancient desk chair known as “The Pleather Bomber,” she can be found practicing obscene amounts of yoga, whipping up anything from enchiladas to éclairs in her kitchen, or curled up with her nose in a book. Kimberly is a 2011 RWA Golden Heart® finalist who lives (and writes!) by the mantra that food is love. She resides in northern Virginia with her wildly patient husband and their three daughters.