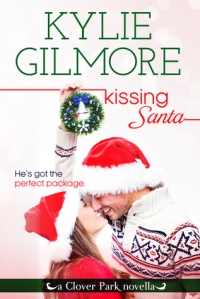 Samantha Dixon is about to confess her most secret, romantic Christmas wish to Santa. Heck, what’s she got to lose with her disastrous romantic history? Like that player from her horrible blind date last week arranged by her mother. Only guess who’s Santa?

Rico del Toro loves women. So one bad date with the beautiful Samantha in a string of many, ahem, successful evenings is no big deal. But when a friendly favor playing Santa unexpectedly lands Samantha on his lap for a romantic confessional, he’s intrigued. He’s never heard a woman open her heart like that before.

But if this Santa wants a second chance, he’ll have to rethink his womanizing ways and convince her that he is the perfect package.

ADD TO YOUR GOODREADS SHELF

Samantha walked over and plopped down on Santa’s lap. She took comfort from the fact that she couldn’t quite see Harold’s face under the hat, wig, and huge beard. She focused on a pretty snowflake decoration across the room. It was almost like going to confession with Father Jensen, very private, just the two of them. The cafeteria was nearly empty now, except for a few volunteers cleaning up. Even the elf had taken off.

“Oh, Santa, I know it’s silly, but I always dreamed of a sweet romance like you read about in books and see in the movies. It just doesn’t seem to be happening for me. And believe me, I’ve tried to move things along.” She sighed. “It just seems like everyone’s already married or gay or divorced with a lot of baggage. I just want to meet my Prince Charming, you know?”

At Santa’s continued silence and good listening, Samantha confided all the heartache she’d endured over the last two years due to her failed romance attempts. First she told him the worst—the Tim Johnson affair—just to get it off her chest and explain what started her on her quest for romance. Then she moved on to the day her hair and makeup were ruined in the August heat while she waited for a mysterious Mr. Hunk to arrive on the scene to change her flat tire (and yes, she confessed, she’d let the air out on purpose) and how a toothless old lady had arrived instead to inform her she had a flat. She’d had to change the tire herself, ruining her white skirt and new heels. She told him of the British hottie who moved in next door to her parents’ house that looked a little like Hugh Grant—she’d loved him in Bridget Jones’ s Diary—and just when she was thinking they might really be moving from borrowing sugar (she had a huge stash now) to actually hanging out, his boyfriend showed up.

She sighed and continued on with the advice she took from her friend to look for someone at a wedding and how that had turned out to be a second cousin she’d never met. “Luckily my mother told me before things moved off the dance floor,” she whispered.

Santa merely grunted, so she went on. “Online dating was horrible. All those men cared about was my…well, let’s just say it wasn’t working out.” She blew out a breath. “I have a huge hammer collection from all my trips cruising the aisles of Home & Tool for an eligible bachelor. I could never use them all.” She shook her head. “Besides, those guys are all married.” She straightened, suddenly indignant. “And the worst, my mother tried to set up an arranged marriage with this total player who was too handsome for his own good. He was all—” she waved her hands in the air “—look at me! Don’t you want some of this sugar? And I was all, get away from me, you phony! The lines that came out of this guy’s mouth! If my mother had known what he was really like…” She exhaled sharply. “Don’t get me started on my mother.”

Finally, she wound down.

“This was all my niece’s idea,” she said with a rueful laugh. “Since I’m here…my Christmas wish is to meet a handsome, smart, charming man that will just make my head spin with the happiness of true love.” She warmed to her topic. “Make him be someone who brings me flowers and candy just because, writes poems for me, serenades me, and likes to hold hands while we go shopping, ice skating, or maybe even walking along the beach.” She let out a dreamy sigh. “I guess that’s too much for one Christmas wish.”

Santa’s voice went low and husky. “I’ll see what I can do.”

Her eyes flew to his, and she took a good look at the guy she’d just spilled her guts to. He smiled, and her hand went to her throat. This man didn’t have wrinkles, pasty white skin, and blue eyes. This wasn’t Harold! This was someone much younger with caramel skin and brown eyes behind those spectacles.

Santa was coming on to her!

She leaped off his lap and jabbed a finger at him. “You’re Santa. You can’t pick up women. You’re married to Mrs. Claus.”

Dear Lord, what had she just told this complete stranger? Her cheeks burned.

The Santa-Harold imposter stood and raised his palms. “I’m off duty. You want to get a cup of coffee?”

She whirled and hurried over to her niece. “Come on, Gabriella, we’re going.”

“Ho-ho-ho, Merry Christmas, Gabriella! I’ll make sure the elves know about your Christmas wish and yours too, Samantha!”

She froze. Omigod. He knew her name. She’d never said her name. And that voice. Her mind quickly put the pieces together, that beautiful caramel skin, the brown eyes. It was her horrible blind date—Rico.

She took Gabriella’s hand and speed-walked to the parking lot. Samantha had never been so embarrassed in her life. She buckled her niece in, muttering to herself about the nerve of some guys.

They drove home, and Samantha prayed she never, ever ran into that Harold imposter again.

~My Review of KISSING SANTA~

This book is a great love story and a great read! I laughed out loud so many times, found myself shaking my head, and overall had a smile on my face pretty much from beginning to end. KISSING SANTA is the fourth book in Kylie Gilmore’s Clover Park series, but is easy to read, and thoroughly enjoy, all on it’s own. However, I absolutely intend to go back and check out the first three Clover Park books, because Kissing Santa was fabulous and I hate feeling like I’m missing out!

Right from the start you feel for both of the main characters, Samantha and Rico. They both have intense Italian, catholic, matchmaking mothers who don’t take no for an answer and have no problem forcing their adult children to their will. Samantha has had a string of bad luck when it comes to boyfriends, but still holds out hope for a truly romantic man who will capture her heart and love her forever. Does she think her mother is the one who will find that man for her? In a word, NO! But she loves her Mama, so she agrees to go out with her mother’s friend’s son just to stop the nagging.

Rico loves the ladies! He is a player to the bone and has had so much success picking up women for the night he thinks he knows all about women, since they are usually falling all over him. Of course, he has no clue what to do with a real woman once he’s bedded her aside from walk away. A happy bachelor, he loves his life just as it is and has no interest in settling down. However Rico also loves his Mama, so he agrees to take out Samantha for the sake of keeping peace, and believing it will be a quick one time deal.

First impressions go well for both when it’s still at the level of outside appearance, but the date itself is a disaster. Samantha is disgusted with Rico and he hasn’t a clue why.

“And the worst, my mother tried to set up an arranged marriage with this total player who was too handsome for his own good. He was all—” she waved her hands in the air “—look at me! Don’t you want some of this sugar?”

They are both happy to be done with the date, feeling like they’ve done more than their part for their mother’s crazy matchmaking plans.

But then, Samantha talks to Santa about her hopes for a finding a man she can really love, with a thorough description of what that dream man would be like and well… it’s on. Because unknown to her at the time it was Rico behind the Santa suit and he is intrigued. And challenged. What ensues is both sad and hilarious. Poor clueless Rico, who in the beginning I had no sympathy for, is hooked and does everything he can to win Samantha’s heart. But did I mention he’s clueless? His intentions are good, he humbles himself and seeks advice from a friend, from his older married sisters, from chick flicks, and even from romance novels. He might have been struggling to win Samantha’s heart, but he won mine. In his sweet, though pathetic way, he was doing his best and absolutely sincere, even if he continued to only fail when it came to understanding what it meant to really show Samantha his heart and how much she had come to mean to him.

For her part, Samantha kept giving Rico another chance, despite how miserable the results of his other attempts to show her he was ready and wanting to have a real and true relationship with her. I admired that she stuck to her guns, that she refused to settle until she was certain his motives and actions were sincere and sure of what loving someone truly meant. Her heart had been broken before and she was no pushover. The result was a wonderful HEA ending with plenty of steam and sighs. Their friends and family were a great contribution to the story development and I look forward to going back to read about the romance between the couples in the first three Clover Park books. Kylie writes in a perfectly paced and easy to read style, that includes clever dialogue, excellent insight into the characters thoughts and feelings, and a plot that kept me eagerly turning the pages to see what would happen next. Truly I almost hated to see it end I enjoyed the antics so much. 5 stars

Kylie Gilmore was lucky enough to discover romance novels at a young age as they were strewn all over the house (thanks, Mom!). She writes quirky, tender romance with a solid dose of humor. Her Clover Park series features the O’Hare brothers, three guys you’d definitely have a drink with and maybe a little more.

Kylie lives in New York with her family, two cats, and a nutso dog. When she’s not writing, wrangling kids, or dutifully taking notes at writing conferences, you can find her flexing her muscles all the way to the high cabinet for her secret chocolate stash.

Join her newsletter to hear about New Releases!

Enter to win one grand prize winner of a $25 Amazon gift card (or B&N if they prefer)
and a signed paperback of The Opposite of Wild.
Giveaway runs for two weeks from October 3rd to October 17th, 2014.