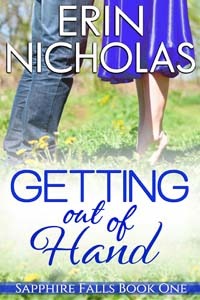 SYNOPSIS:
Sapphire Falls has few good memories for Mason Riley. So what’s he doing in the middle of the annual town Festival/class reunion eleven years after leaving town without a look back?

Letting the most popular girl in town—then and now—kiss up to him.

Mason has come a long way from the nerdy outcast Sapphire Falls remembers. His genius IQ has helped him make a name for himself with everyone from the World Health Organization to the White House. He’s also got the bank account to make the Mayor of Sapphire Falls herself—the girl who broke his heart in high school and the one who now wants him to donate to the town’s big building project—take notice.

He can’t wait to tell her no in person.

Adrianne Scott loves Sapphire Falls. The sleepy little town where her college roommate was elected Mayor has been the perfect place to escape the fast-paced, high stress sales job she had in Chicago. She’s happy, healthy and the new project means her dream candy shop can now become a reality. Everything is good in her quiet life. Until Mason Riley comes home.

Mason sure doesn’t look—or kiss—like a socially awkward geek. In fact, he makes Adrianne’s heart pound like nothing she’s ever experienced. Which means she needs to stay far away from him.

A great plan, until her friends inform her that Mason’s donation to the project is dependent on keeping him away from the Mayor while he’s in town.

Now all Adrianne has to do is keep Mason busy, distracted and feeling good about—and generous toward— his hometown… oh, and avoid falling for the world-saving, nerd-turned-hot-guy in the process. 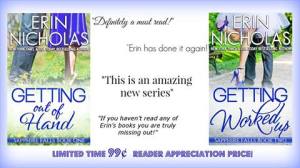 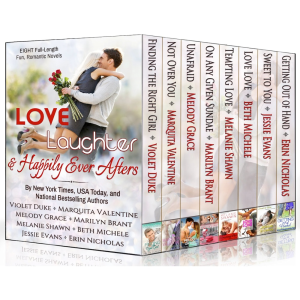 OR, For an even better deal… in the .99 boxed set, Love, Laughter & Happily Ever Afters!

8 books for the same price on Amazon

AND… the boxed set has hit the USA Today Bestseller list for the THIRD week in a row!

MY REVIEW:
I officially have a new book boyfriend! Mason Riley, the hero in GETTING OUT OF HAND, the first book in Erin Nicholas’s wonderful new series Sapphire Falls, is the new love of my life! Well, at least in my fantasies he is. The man is a genius who graduated two years early in high school, but got no respect from his classmates in Sapphire Falls. Instead they wrote him off as a nerd who didn’t fit in. He crushed on Hailey, the most beautiful and popular girl in school for years only to have her humiliate him by rejecting and laughing at him in front of all her friends. They say the best revenge is to live a wonderful life and he certainly has! He moved away for college where with the help of his best friend, Lauren, he learned to dress stylishly, pumped up his body at the gym, and learned how to fit in at social settings. Now the man is a renowned scientist who meets with the President of the United States, implements ground breaking projects to help save third world countries, dates beautiful women, and has more money than the other four most successful men in his class combined. Oh, and did I mention he’s used his scientific mind to study and learn how to best please women sexually? So a rich, handsome, kind, philanthropic, genius who dresses well, and has mad skills in the bedroom and is a bit of a dirty talker. Mine!!

Adrianne Scott didn’t grow up in Sapphire Falls like most the townsfolk, but she was Hailey’s friend in college. After a health scare she decided to walk away from her fast-paced, crazy, competitive, stress filled life working for her family’s international business based in Chicago. She takes the low-key job as assistant to Hailey who is now the Mayor in Sapphire Falls. She may have only lived in town for three years, but she loves her quiet, slow-paced, peaceful life and all her new friends. She’s a smart, beautiful, kind, giving woman who has all the men crushing on her to the point there’s an ongoing bet as to who will get to kiss her first. But she hasn’t been willing to risk her heart, so she hasn’t dated any of them.

Hailey’s determined to put herself in the Sapphire Falls history books by developing a shopping center that will bring growth and boost revenues for the townsfolk. She wants to build on land Mason owns so she invites him to town hoping to capitalize on the crush he’d had on her and talk him into donating the land along with about a hundred grand to get the project off the ground. When Adrianne researches Mason she becomes fascinated with his accomplishments, not to mention his good looks, and can’t wait to meet the man himself. When Mason does come back to town after eleven years, it’s not to help the town or the woman who spurned him. It’s to thumb his nose up at Hailey and her project in person. However, the minute he sees Adrianne he can hardly think of anything else, including his revenge. The attraction is mutual. Adrianne is equally smitten with the sexy scientist. She finds herself forgoing all her rules to keep her heart safe and is instead peeling off her clothes for him at every opportunity. Their romance is quick, hot & heavy, eye-opening and life-changing for each of them. They are perfect for each other and it was wonderful to read their love story.

Sapphire Falls comes with a cast of adorable, quirky, sassy, enchanting characters that round out this story in such an enjoyable way. Erin writes so splendidly I felt right in the middle of what was happening as if I was there laughing and plotting along instead of merely reading about it. The ending was marvelous. A true romantic, I love nothing better than a great HEA ending. Getting Out of Hand delivers in a sigh-worthy way, leaving me wishing for more. I can’t wait for the second book in the series, Getting Worked Up, and more fun with the people in Sapphire Falls. 5 stars

~Complimentary copy received in exchange for a honest review. 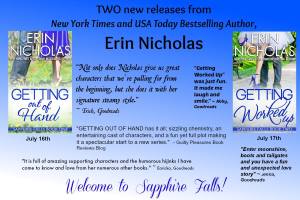 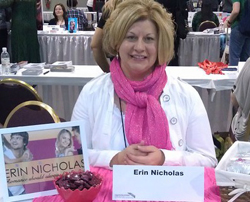 Check out the entire Sapphire Falls Series on Goodreads! 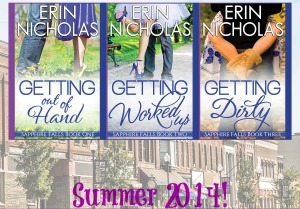