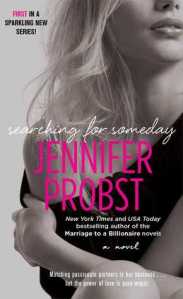 Kate has given up on love—at least for herself. She is both blessed and cursed with the ability to sense a romantic connection between two people—a gift that her family passed down for generations. When Kate launches her own matchmaking company, Kinnection, with her two best friends in a cozy New York town, she has to put aside her own romantic disasters to make her business a success.

But when a furious man stalks into her office and accuses her business of being a scam, Kate is given the ultimate challenge to prove herself. Slade puts himself in her hands and asks Kate to find him love. Enraged at his arrogance but stubbornly eager to prove herself, Kate agrees, dedicating herself to the journey of finding him love…only to find herself falling for him along the way.

SEARCHING FOR SOMEDAY was my first Jennifer Probst book and I loved it! The story line hooked me right from the beginning and kept me eagerly turning the pages to the end. Kate owns a matchmaking service Slade’s sister has hired to help her find a true love after being dumped by yet another loser boyfriend. Slade is convinced his sister Jane is fragile, needing his constant protection, vulnerable and being taken advantage of by con artists. So he storms in threatening to ruin Kate and her partners by dragging them through court and exposing them for selling something he believes is a myth, true love. To prove he’s right Slade challenges Kate to find him a love match and this is where the fun begins.

Kate and Slade were great to watch as even though the sparks literally flew between them they tried to convince themselves how wrong they would be for each other because their views on love were completely opposite. Kate chose to deal with it by avoiding Slade. Slade wanted to deal with it by seducing her into hot sex and getting her out of his system so he could move on. Those plans didn’t work out for either of them, but make for a fantastic story for lucky readers.

Ms. Probst gives us an incredibly well-written tale that is funny, sexy, romantic and ends with what all romance fans crave. A sweet HEA. Sure she wrote of a sexual chemistry between Slade and Kate that comes right off the pages but she also adds in the bonus story of the deep and sincere brotherly love Slade has for Jane and the close longtime friendship between Kate and her business partners, Kennedy and Arilyn. I also really enjoyed the special element Kate’s love for Robert and how well they communicated added to the story. All of the characters were well-developed with delightful personalities and witty, realistic dialogue to keep the story moving and leaving you wanting more. I can’t wait for Kennedy and Arilyn’s turn at finding their true loves. 4.5 stars

~Complimentary copy received from NetGalley in exchange for an honest review.