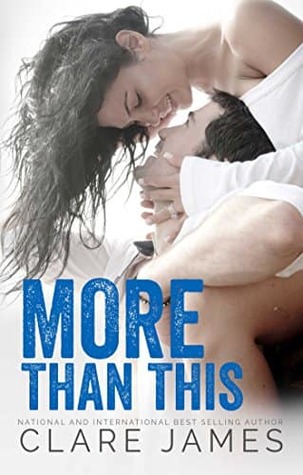 MORE THAN THIS is a hot and hilarious STAND-ALONE romance from Clare James’ best-selling Impossible Love Series!

It’s all fun and games…until you live together.

I bite my lip when Foster’s tattoo peeks out from under his shirt. Yes, it is completely cliché. And yes, I do look like some kind of B-list p*rn star lusting after this man and going into heat every time he shows a little skin. But seriously, he is that delicious–which is why I occasionally succumb to his advances.

He’s also one of my best friends, so I really need to get it together.

I’m not the only one. Foster is a mess, trying to figure out his own crap–usually over whiskey Cokes–and it’s getting old. That’s why I’ve finally made a vow to forget him and find something real. But when I’m hurt in a ridiculous bar fight and left with broken bones, I have no choice but to let him move in and help me out.

It’s a roommates only situation. Really…well, until it isn’t.

*MORE THAN THIS is a full-length, stand-alone romantic comedy that can be read on its own, or as part of the Impossible Love Series.*

FREE for Limited Time Only!

If a picture is worth a thousand words, I’m pretty sure this one includes every dirty term in the dictionary… and even some that aren’t. Because…whoa!

But it’s not so much a picture that’s currently conjuring up these filthy words as it is a live image, complete with a real-life man. And as I stand in the room, like I have so many times, I assess him as I would any subject—taking in the light and the lines, the colors and composition. My eyes are the lens and I zoom-in to capture every detail. I’ve spent so much time behind a camera that it’s become second nature.

In the case of Foster Sutton, it’s become my favorite pastime.

Where’s a camera when a girl needs one?

I want to capture all that deep black ink that spreads across Foster’s toffee-colored skin along his lower left ab. Not that I haven’t seen it before. I have. Actually, I was with him when he got the tribal eagle tattoo. It’s a symbol to remember his dad, though he’s never really embraced his family history, not even after his dad died in junior high. But he’s trying to figure it out now. He’s trying to figure out a lot of things—usually over whiskey Cokes.

I’ve been up close and personal with his markings of guilt on a few occasions. And guilt is precisely what I’m feeling now as I stand here drooling over Foster’s body. It’s more than a bit shady—gawking at him while he’s passed out—but I can’t tear my eyes away.

His shirt is riding up and the fly of his jeans is open, telling me he tried to take off his clothes before passing out. But it looks like the booze won this time. He sent me a text from the bar about an hour ago, incoherent and needy—his telltale signs of being inebriated. Of course, I rushed right over.

“Come here, baby,” he says, reaching for me from a pool of drunkenness.

And I want to, believe me. Oh how I want to, but we’ve played this game too many times before, and what a girl needs is her dignity—not a purse holding her panties while she does the bull-legged walk of shame home in broad daylight.

I skillfully avoid Foster’s grasping arms, knowing I just have to keep away from him for the next few minutes. He always gets a second wind right before passing out completely. Trouble is, I don’t want to stay away. I want to climb in bed and lick him like a Popsicle.

I want to take away his pain—at least for a little while. But I’ve been trying to do that for the last two years and nothing changes. We never move forward. We never get back to that place we were before the accident. Before everything went to hell.

It’s that thought that helps me pull away from those delectable abs to get the supplies I need. But when I move down the hallway, I swear Foster begins hissing at the sunray beating down on him. I can’t blame him. The afternoon light is annoying me as well. It’s glaring through the apartment as if to say, “Look around, woman! Look at this mess of an apartment, this mess of a man. What are you doing here?”

After I get what I need from the hall closet, I tell the bitchy sunbeam to zip her lip and then close the blinds in the tiny studio. Foster mumbles what I assume is a thank you from the futon. The sorry sack didn’t even wait until nighttime to hit the bar today, and I wonder what set him off because it’s been months since I’ve had to play Nurse Jackie.

I grab his blanket from the floor and drape it over his body, covering that damn tattoo.

There, that’s a little better.

Foster’s place is a dump, but it’s close to campus and it’s all he could afford after our friend, Noah, finally kicked him out last year. I don’t blame Noah in the least, Foster’s act is getting old. Even for me.

“Here, take this,” I tell him from the side of the futon, holding out three Advil and a glass of water.

Foster takes the water glass from my hand and sets it on the bedside table, but instead of downing the Advil like a good patient, he grabs both my wrists and yanks me into the bed with him. The pills fly through the air and he has me pinned under his body in less than a second.

“I’d rather take you,” he growls in my ear, shaking me to my core…in the very best way. 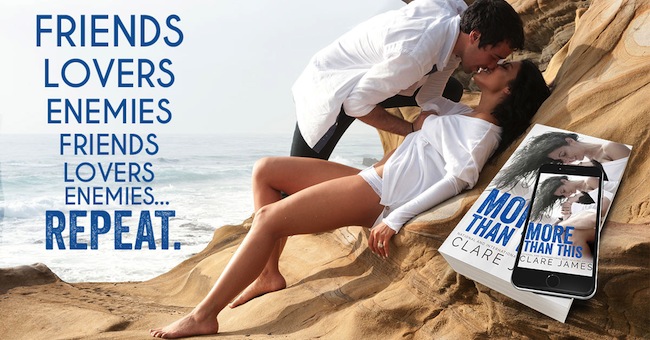 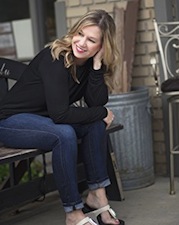 CLARE JAMES writes steamy contemporary romance and new adult stories, penning more than a dozen novels. Her Entangled Brazen debut, CAUGHT, was a #1 Best-Selling Romance Series, and her books have hit the best seller rank in several romance categories worldwide.
Clare—a fan of spunky heroines, alpha heroes, and super-hot romance—spends most of her time lost in books. When she’s not reading, you can find her locked away writing. Clare is also a former dancer and still loves to get her groove on – mostly to work off her beloved cupcakes and red wine. She lives in Minneapolis with her two leading men, her husband and young son, and is always on social media chatting with readers.
Sign up for Clare James’s newsletter and be the first to hear about new books, bonus content and exclusive offers! http://eepurl.com/6PV7r