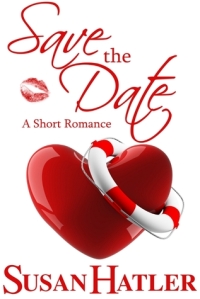 Kristen knows men hide things. Case in point, her last boyfriend turned out to be married. Just like anyone else, Kristen is devastated. However, since Kristen evaluates people for a living, her ex’s duplicity has her searching for a new career as well as swearing off men.

Touring history museums with her sexy friend Ethan doesn’t count, because he has a girlfriend, and has only shown friendly interest in Kristen. He even helps with her career counseling tasks. Although Kristen has a secret crush on Ethan, spending time with him is safe. Until she discovers he’s actually single. Gasp. And now he’s flirting with her, too.

Suddenly, Ethan is way too dangerous. Not to mention tempting. Sure, he seems like sixty shades of perfect, but how’s a girl with bad judgment supposed to detect what skeletons he has in his closet?

Another great story from Susan Hatler! I’ve loved Kristen’s character in the previous Better Date Than Never books and was thrilled she’d have her own happy ending. Even happier it was with Ethan who she’d once tried to set up with Gina even though it was obvious she had a thing for him herself at the time. Ethan and her have many interests in common (which in Kristen’s mind makes their time together non-threatening), but more importantly amazing chemistry. A large part of this story is about Kristen trying to find her confidence again after her ex, Jake, rocks her world and not in a good way. Her friends, Rachel, Ellen, and Gina are there for her as well as Ethan. He patiently waits for her and offers her his friendship and support while she figures things out. Her self doubts spill over into her friends lives a bit, but everything works out in the end. She also makes a new friend, Melanie, who I’m looking forward to reading more about in A Twist of Date.